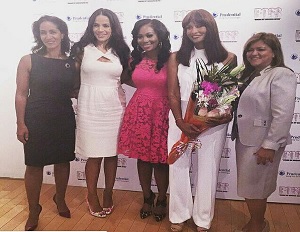 On Wednesday, May 10th, The BOSS Network took over Studio Arte in New York for its dynamic Ladies That Lead tour event.

Bringing out hundreds of professional women, and a few men, the event featured a conversation with some of the media industries top influencers including producer and director Crystal McCrary, Black Enterprise’s Editorial Director for Women of Power, Caroline Clarke, Essence Magazine National Sponsorship Director, Staci Hallmon-Bazzani, and Prudential’s VP of Annuities Business, Sandra Garcia. With each of the ladies opening up about their journey to success, their key to balancing professional and personal and advice they would give their 25-year-old self, the event left attendees inspired and empowered to move forward in achieving their career goals.

While the ladies all agreed that work-life balance differs for all women, Clarke added that it’s OK not to have it all, just as long as you have enough for you.

She added, “Balancing is forgiving yourself when things are out of order, and there is always something out of order.”

With each of the panelists having reached an admirable amount of success, McCrary made it clear that being a leader in your profession is about always being willing to learn.

“Leadership is being a perpetual student,” she said. “Be humble.”

Following tidbits of advice and empowerment from the ladies, the BOSS Network’s founder, Cameka Smith, presented entrepreneur, Amber Noble Garland, with the 2015 Leadership award for her commitment to uplifting the community and mentoring others. Garland, who’s a talent manager, TV producer and real estate expert, thanked Smith for creating such a dynamic organization and donated money to sponsor a young lady who’s interested in joining The BOSS Network.

Afterwards, the event featured a candid one-on-one interview with model and entrepreneur Beverly Johnson who talked about her journey from being the first African American model on the cover of Vogue to adding author and entrepreneur behind her name. During audience Q&A, Johnson bravely responded to an attendee’s question in regards to her encounter with Bill Cosby and the sexual assault allegations surrounding him, saying she knew it was time to speak her truth regardless of the criticism she would receive.

“When you’re out in front, doing your thing, you’re a target. I say bring it,” she said.

To learn more about The BOSS Network and its next tour stop visit ladiesthatleadtour.com. Also, be sure to follow the hashtag #LeadIn2015 and #WomenInspired to stay-up-to date on all the wisdom and words of advice shared during the event.