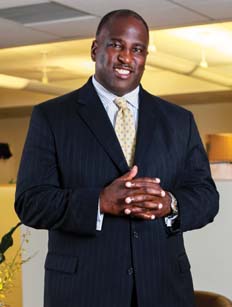 At Wesleyan, Dove developed a passion for writing, serving in editorial roles at two publications on campus. Dove was certain his degree would lead him to a career in sports reporting, but that changed once challenged with trying to support himself in New York City. He landed a job in textile sales, but Dove longed for something more meaningful.
He wanted to make a difference in the African American community.

How he got the job:
In January 2008, Dove received a flurry of e-mails from former colleagues and friends about the Campaign for Black Male Achievement position. His network tried to convince Dove it was the ideal job for him, but he was unsure. “I didn’t know if I wanted to pursue [that] path, so I didn’t respond to the opportunity,â€ recalls Dove, who was director of youth ministries at First Baptist Church of Lincoln Gardens in Somerset, New Jersey, and the founder and publisher of Proud Poppa, a magazine for African American fathers. “I thought it would detract from Proud Poppa, then I had a reality-check conversation with my wife, which helped me realize I should seriously explore the opportunity.â€

Dove, a father of four, applied for the coveted job that had attracted a huge pool of candidates. It was a three-month vetting process that included five interviews. The project was launched in 2008 by George Soros’s Open Society Foundations, and is the largest philanthropic initiative to address the economic, political, social, and educational exclusion of black men and boys from mainstream America.

Relevant experience:
By the time Dove landed the job, it was as if he had been grooming for the position his entire life. With leadership positions in the fields of education, community building, and youth development, Dove had all the right credentials. “Everything I have done in my career has helped in this golden opportunity,â€ he says. “I’ve worked in the [youth development, educational, and community development] fields for decades and I’ve been on both sides of the table.â€ Dove’s previous positions include vice president for MENTOR/National Mentoring Partnership; executive director of The DOME Project, a youth development organization; and Creative Communities director for the National Guild of Community Schools of the Arts. Dove was also program director at the Harlem Children’s Zone for a decade, where he was the founding editor-in-chief of Harlem Overheard–an award-winning newspaper produced by youth–and helped launch one of New York City’s first Beacon schools.