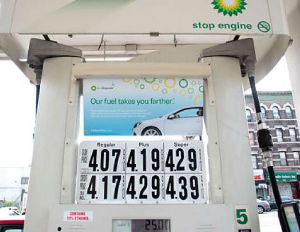 BP’s former head of gas liquids trading, Derk Sickinger, is speaking out after being let go from his job so the gas mogul could allegedly manipulate gas prices, reports the Huffington Post.

The gas giant is no stranger to price manipulation as they were accused of the conspiracy in 2004 and fined by the Justice Department. The company is also still under investigation for doing the same thing in 2008.

BP responded to the Huffington Post regarding the accusation saying, “Allegations of market misbehavior arising from this legal proceeding are untrue and without merit,â€ a BP spokesman wrote in an email. “BP is not engaging, and will not engage, in any price or market manipulation. Our ongoing trading strategies are lawful and compliant.â€

While the propane brand faces past and current charges regarding gas price rigging, Senator Maria Cantwell (D-Wash.) is asking the Justice Department “to investigate whether artificial shortages were responsible for prices surging to more than $4 per gallon on the West Coast in October, according to the Hill.â€ Cantwell made the request to the Justice Department in this past November.