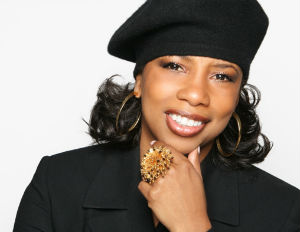 She should — she’s worked with some of the biggest names in show business: Mary J. Blige, Diddy, Jill Scott, Lenny Kravitz and more.

Now, as the owner and CEO of her own business, BYOB — or Build Your Own Brand — since 2009, she’s taken what she’s learned as an entertainment exec and made it work for her *own* brand. This means moving beyond entertainment (though she did just help R&B siren Keyshia Cole land a shoe deal with Steve Madden) and into corporate and personal-branding territory, inking deals with the First Lady of Bermuda, Comcast, Coca Cola, Neutrogena, State Farm, Sony, Dress for Success and other marquee names.

Coates swears that a great marketing plan — as evidenced by the campaigns she’s helped develop for major and unknown acts during her 10 years in the music game — can send even an already very successful business’ image (and thus sales) over the top.

Macy’s — a client she went after while launching her “Discover Your Brandâ€ 10-city tour in 2010 — is evidence of this. She says she landed a contract with the department store juggernaut after presenting the company with solutions to some of its branding challenges.

“I was seeing these Macy’s commercials, despite the recession and the fact that they were letting people go,â€ she explains. “In the commercials, the chief executive said he was always open to new ideas so I set out to show him that my company could show Macy’s consumers how to shop better and be their own brand in this economic climate. I sent it to five executives, including the CEO and he replied in less than a week. He was impressed, but wrote that he was letting people go. But I didn’t stop there. I took that email, and found out who handled advertising and promotions. I got through to the head of multicultural marketing and told her that the CEO liked my proposal. I set up a meeting face-to-face, and she loved it and got it approved.â€

Coates says while she had to teach herself how to be a successful entrepreneur, strategy and tenaciousness in marketing has long been in her blood.

“I took on the onus of learning how to brand during my tenure in music,â€ she says of the executive positions she held handling multi-million dollar marketing budgets for Sony/BMG, EMI/Capitol, Arista, Virgin, MCA, Perspective and Hidden Beach Records. “What I was focused on with music clients is what I use with all my clients today. I need to know, what is going to make my client unique? I find that it normally takes an in-depth conversation with any client who is looking to brand him or herself. For artists I used to use a sheet with all these questions on it, asking, ‘Why are you making this record? Who are you making it for? Why do you think your record is a hit and who is it for? They had to really think about how they were and how they could make that translate into fans and sales.’â€

Ultimately the keys to Coates’ BYOB concept are simple, she says, though they’re deceptively powerful in their simplicity. They are:

1. Definite it: What is your ‘brand’ and what makes you unique? Are you creative, analytical, powerful, eclectic, persuasive, outgoing? Embrace your top three attributes and use them to your advantage.

2. Look it: Your personal and business brand/style should speak volumes without saying a word. The reality is that people form an opinion of you within 30 seconds of meeting you, before you even say a word — whether at a job interview, in a business meeting, or on a first date. “If someone tells you they are a hairdresser, you immediately look at their hair,â€ Coates explains. “If their hair doesn’t look good, you instantly think twice about letting them do your hair.â€

3. Be it: Project who you are and be consistent. Those who are most successful, know who they are and stick to their image and persona.

“I feel very happy and fortunate to have created something that changes the way people think, live, project and dress; it’s extremely empowering,â€ Coates adds. “I love helping people and developing concepts, so being able to combine the two while changing lives is a blessing.â€