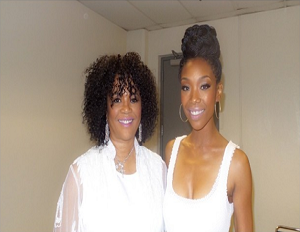 R&B superstar Brandy can now add Greek life to her rÃ©sumÃ©, as the singer has been inducted as an honorary member of Alpha Kappa Alpha Sorority, Inc.

Following in the footsteps of her mother Sonja Norwood, who was initiated at Southern University’s Beta Psi chapter, Brandy received her honorary letters on Wednesday at AKA’s 66th Boule in Charlotte, North Carolina.

In her Instagram photos from the monumental ceremony, Brandy gave her mom a shout out, posting the above photo saying, “Today was a very special day. I became an honorary member of #AlphaKappaAlpha! I made this very special lady proud. @sonjanorwood -My mom’s legacy as an #AKA continues. Love to all my #Sorors #sisterhood #ethics #strength #class #leadership #intellect #power #LOVE.”

And to show off her official honorary induction, Brandy threw up The Ivy for the gram.

Congrats to Brandy on her latest honor! We’re sure momma Norwood is still smiling from ear to ear.