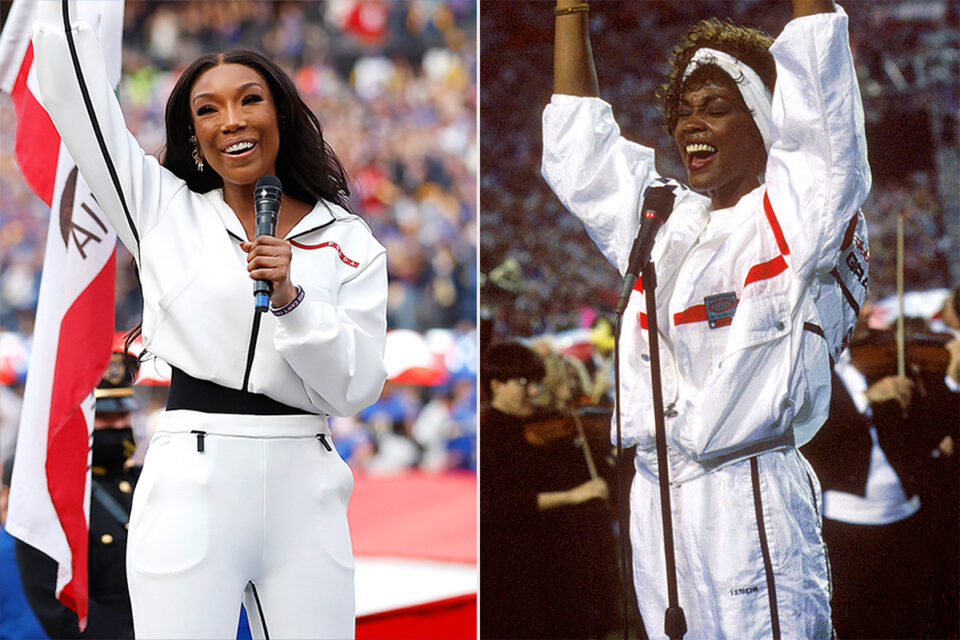 On Sunday, Brandy opened the NFC Championship game with a soulful national anthem rendition. Her glorious runs weren’t the focus this time, but rather the Prada tracksuit she performed in.

Before the Los Angeles Rams and the San Francisco 49ers took the field, the Cinderella actress stood proudly on the podium and not only shocked football fans but those of the late Whitney Houston.

The red, white, and black tracksuit she sported sparked nostalgia for many people, as it resembled Whitney Houston’s outfit from her 1991 Super Bowl performance of “The Star’s Spangled Banner.”

Many social media users couldn’t help but draw comparisons between the two outfits.

“Brandy sang the national anthem today in a white Prada tracksuit. It reminded me of the one Whitney Houston wore for her unforgettable 1991 rendition,” one Twitter user said.

Brandy sang the national anthem today in a white Prada track suit. It reminded me of the one Whitney Houston wore for her unforgettable 1991 rendition. pic.twitter.com/9UClGGpJMq

Another Twitter user wasn’t surprised by Brandy’s effort to honor her late idol. “One thing about Brandy, she’s gonna always find a way to pay homage to Whitney Houston #NFCChampionship.”

Throughout the years, the “Boy Is Mine” singer has openly shared her outlasting admiration for Houston, who died in 2012 at the age of 48. She got the opportunity to work with her idol on the 1997 movie musical Rodgers & Hammerstein’s Cinderella. Brandy was cast in the title role, while Houston co-produced and played the part of her Fairy Godmother.

As Disney recently announced the addition of Cinderella to its streaming service, Disney+, Brandy expressed how much of an impact Houston had on her life.

“She has changed my life forever, and she’s gonna change so many others that never really got to see her in her prime,” she told Entertainment Tonight. “I’m so glad that they’re gonna see her in this light. This is the light that she should always shine in.”