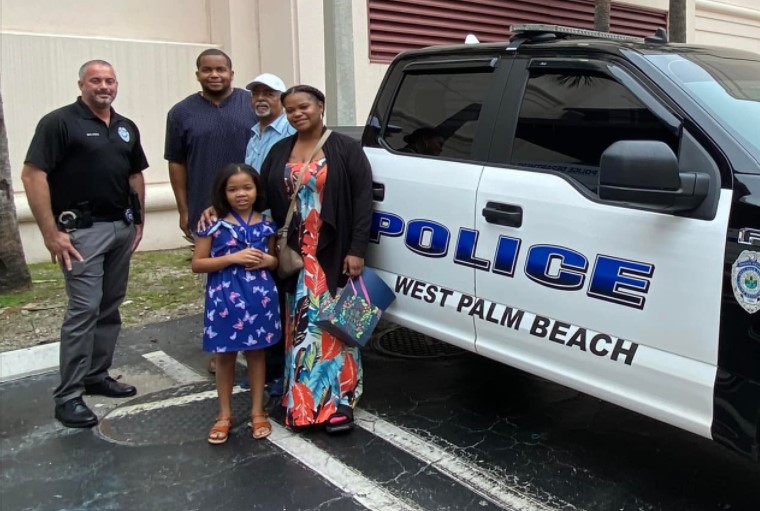 Journee Nelson, 9, was honored for her bravery by the West Palm Beach Police Foundation after rescuing her mother from a would-be robber earlier this month.

According to Fox 5 Atlanta, Nelson and her mother, Danielle Mobley, were outside the Sabor Tropical Supermarket in West Palm Beach. In a video of the incident, the little girl can be seen getting into the car as her mother starts loading their groceries when a man approaches and tries to grab Mobley’s purse.

“We struggled over the purse. He pushed me down to the ground,” Mobley told WSVN. “That is when I let it go and figured he would take off.”

By that point, Nelson had jumped into action, punching and kicking the man, identified as Demetrius Jackson. When the assailant took off as Mobley expected, the girl chased him for five blocks before he eventually got away.

“I’m very proud of her that was her initial reaction,” Mobley said. “I wish we, sometimes, things could be a little different because she is still dealing with this mentally.”

Jackson was arrested two days later and charged with robbery and battery.

On Thursday, the West Palm Beach Police Department welcomed Nelson and her family for a special ceremony. She was presented with a medal and certificate for the brave rescue.

Of course, the situation could have ended much differently: Mobley indicated that Jackson threatened to “pop” her while reaching for his waistband at one point during the altercation.

“I wouldn’t recommend that you confront an individual like that, but in the heat of the moment, things happen. I bet he was shocked when she kicked him right in the face because he definitely could tell on the video that he was not expecting that, and her actions were perfect timing in this particular situation, and I think she hit him pretty hard,” said WPBPD Chief Frank Adderley.