Bresha Webb on the Best Career Advice She's Ever Received 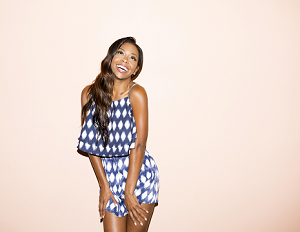 You may recognize Bresha Webb from her recurring role on some of your favorite television shows such asÂ ER, Grey’s Anatomy, and Love that Girl.

But with industry mentors by her side including Angela Bassett, Jamie Foxx and Marlon Wayans, just to name a few, Webb is sure to be a lasting talent in Hollywood on the small and big screen.

With a love for both drama and comedy, the 28-year-old opens up to BlackEnterprise.com about her method for balancing both worlds and the best career advice she’s ever received since being in the industry.

What can viewers expect from your new film Meet the Blacks?

Meet the Blacks is a very unapologetic black comedy that is very socially conscious, especially with everything going on in the United States. It has both comedy and horror and a pinch of reality to it,which I like.

You’ve been blessed to work with some great talent in the industry. Who are some of your biggest influences?

Jamie Foxx has been a great mentor to me. I met him while I was doing Love that Girl because it was created by Bentley Kyle Evans who was one of the creators of The Jamie Foxx Show. Jamie came to set and he put me on this comedy show on Fox and helped me really get into the mainstream comedy world.

I’ve also worked with Angela Bassett on ER and she’s been a helpful influence on my career. Mike Epps now has become very much so an influence in helping me to just look at the industry and how to handle it. Also, Regina Hall, Romany Malco, Niecy Nash and Sherri Shepherd.

What’s the best career advice you’ve received and who did it come from?

To always stick to my gut. Sometimes as an artist, you can get nervous about how things will affect people and you will not take jobs because you don’t want to push any buttons. But if your gut says do it, you must do it. If you’re afraid of it, you must run toward it.

Also, Marlon Wayans is a great friend and always told me to go with my gut and just really put it all out there. As an artist, that’s been very freeing for me with just trying to hold your tongue and not curse too much because I’m a Christian. But you know you have to be free because that’s your artistry.

Be sure to catch Webb’s new film Meet the Blacks in theaters now.