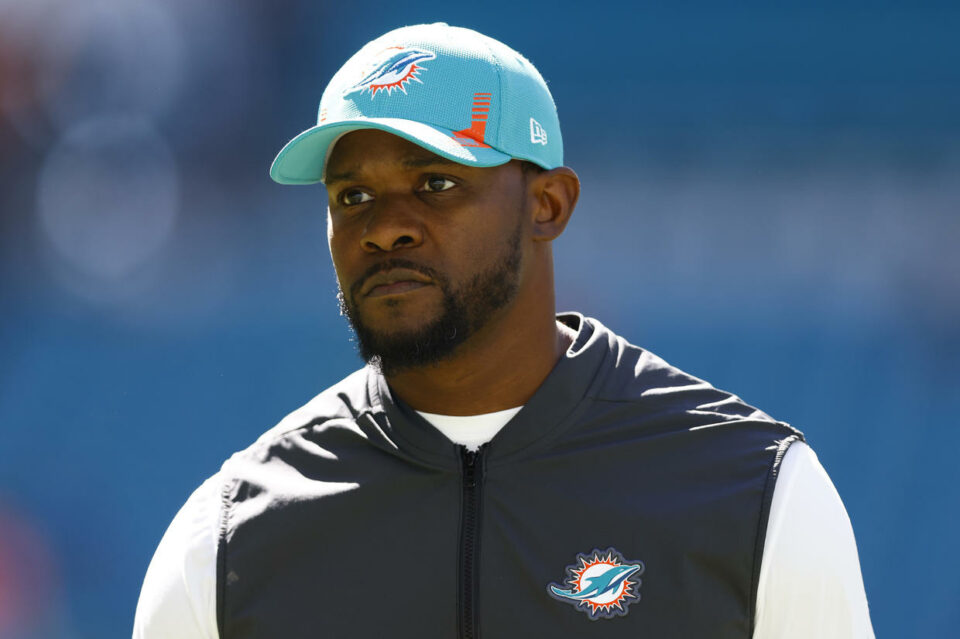 The Brooklyn native spent a decade and a half as an assistant coach with the New England Patriots before finally getting a head coaching gig with the Miami Dolphins.

However, after two seasons in Miami he was fired, but Flores did enough in Miami. He won eight of his last nine games this season to get other head coaching interviews this off-season, including one with his hometown New York Giants.

That experience and a text message his former boss, Patriots head coach Bill Belichick, accidentally sent him has led to Flores filing a class-action racial discrimination lawsuit against the NFL.

Among other claims, Flores’ lawsuit includes three bombshell accusations: Miami Dolphins owner Stephen Ross offered to pay Flores $100,000 for every loss the team recorded to give the Dolphins a better draft position; Ross pressured Flores to tank, or lose games on purpose; and texts Flores received from Belichick showed the Giants had already decided to hire Brian Daboll, a white candidate, before interviewing Flores.

In the lawsuit, Flores claims what millions of fans, most Black NFL players, current and former and coaches across the league know; Black coaches are discriminated against in the NFL.

While the Black players make up 75 percent of the NFL, currently there is one Black head coach, two Black general managers, and zero Black owners. The one Black coach, Pittsburgh Steelers Head Coach Mike Tomlin, has coached the team for the last 15 years largely because he’s never had a losing season.

In the last two years, there have been 16 NFL head coaching vacancies. Just one of those positions have been filled by a Black head coach when the Houston Texans hired David Culley.

Even when Culley was hired, many called it a stopgap move until a more desirable candidate came along. After finishing this season 4-13, Culley was fired a few weeks ago. The current frontrunner for that position is Josh McCown, a white former journeyman quarterback with zero head coaching experience at the NFL level.

Even the NFL’s Rooney Rule, which was adopted due to the late Johnnie Cochran threatening to sue the league in 2002 is a sham.

The rule requires an NFL team to interview at least one minority candidate before making a hire. However, owners and teams typically will interview one Black candidate to fill the requirement before hiring a White candidate, who the team has already decided on.

An example of this occurred when the Dallas Cowboys interviewed former Cincinnati Bengals Head Coach Marvin Lewis, before hiring Mike McCarthy, a white coach, days later in Sept. 2020. However, the Cowboys last week extended the contract of team executive Will McClay, a Black man who serves as the director of player personnel.

One of the factors that makes this whole situation truly disappointing is the fact that by treating Black coaches this way, NFL owners are hurting themselves.

The NFL is a revolving door of coaches, so much so, that the day after the regular season ends is well-known as Black Monday due to the number of firings that routinely occur. Since the end of the 2016 season 36 NFL coaches, including eight Black coaches, have been fired during, or at the end of, a season.

Many are comparing Flores’ lawsuit to the Colin Kaepernick situation in that many believe Flores is risking his career, something Flores acknowledged in a statement.

“God has gifted me with a special talent to coach the game of football, but the need for change is bigger than my personal goals,” Flores said in a statement. “In making the decision to file the class action complaint today, I understand that I may be risking coaching the game I love and that has done so much for my family and me. My sincere hope is that by standing up against systemic racism in the NFL, others will join me to ensure that positive change is made for generations to come.”

The fact that a Black coach has to sue the NFL in order to help its white owners make their teams better by potentially hiring more Black coaches is a true sign of how far America still has to go when it comes to racism.