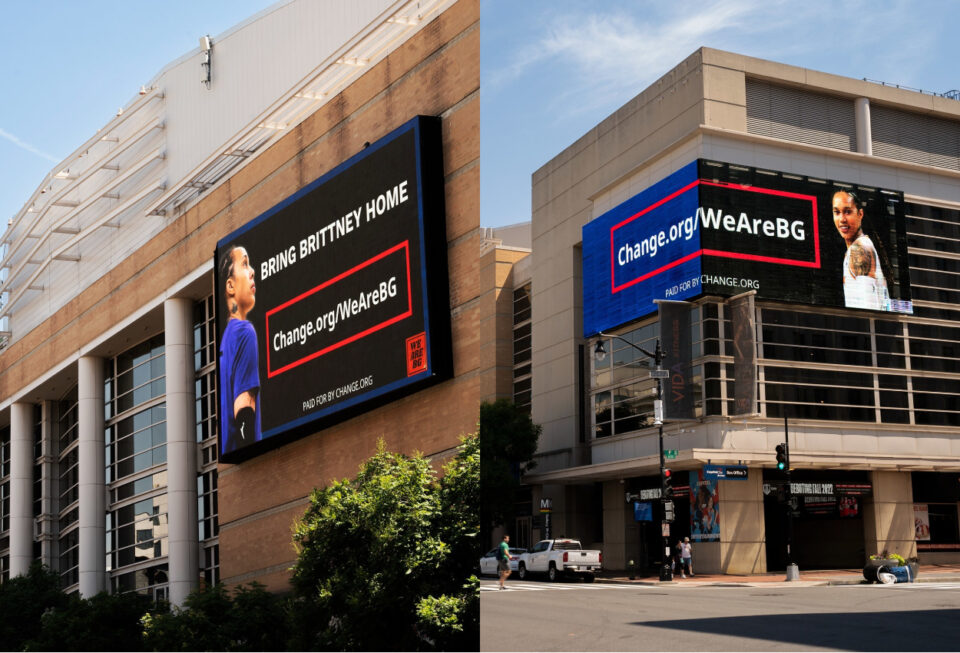 It has been over four months since WNBA star, Brittney Griner, was detained and her first appearance in a Russian courtroom finally started today. On the morning of July 1, in collaboration with Change.org and Brittney Griner’s teammates, family, and legal team, over 6,000 square feet of digital ads covered Capital One Arena in Washington, D.C. demanding Brittney’s freedom.

Nearly 300,000 supporters have signed a Change.org petition for Brittney to be released, calling for President Biden to get a deal done to bring her home swiftly and safely, according to a press release. Started by sports journalist, Tamryn Spruill, on March 5 and in partnership since May 14 with the Women’s National Basketball Players Association (WNBPA), the petition has been featured all over social media and news broadcasts.

“The trial renews concerns for BG’s [Brittney Griner’s] well-being because it is occurring in another country, under a very different legal system, which most of us know little about,” said Tamryn Spruill.

“What inspires hope, though, is the steady stream of public support and media interest. Now, we’ve reached new heights, with these billboards going up at this very critical juncture. When people look up at them, I want them to see their partners, their daughters, their sisters, and their friends. Mostly, I want them to see themselves. Because none of us is free until all of us are free.”

“On the heels of Juneteenth and as we [neared] July 4, days many Americans celebrate freedom, it [was] vital that we come together and call on President Biden and Vice President Harris to do everything in their power to get a deal done to bring our sister, an American hero, Brittney Griner home,” said WNBPA President and WNBA Sparks star, Nneka Ogwumike.

In February, news broke that Russia had wrongfully detained Griner for allegedly traveling with cannabis oil cartridges. Thousands of supporters around the world have since voiced fears about the safety of basketball superstar, including many high-profile celebrities and sports stars. In June, the Boston Celtics wore “WE ARE BG” shirts featuring a QR code linking to the Change.org petition on their practice shirts during the NBA Finals.

“Since February, Change.org has seen an overwhelming amount of support for Brittney Griner and their collective voices are louder than ever,” said Aminata Diallo, campaigner for Change.org.

“Brittney is an American, an Olympian and a WNBA All-Star yet has been stripped of her freedoms. We are working with her team to do everything we can to remind the public that this fight is not over until she is home.”

To learn more about the petition or connect with Tamryn Spruil or WNBA players, please contact press@change.org.