Bringing African Americans Back into Baseball 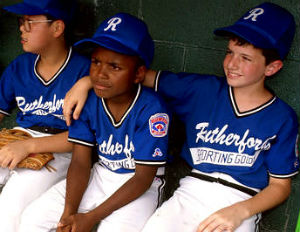 A little more than six decades ago, baseball was ahead of the civil rights curve. Second baseman Jackie Robinson integrated the Brooklyn Dodgers in 1947, seven years before public school integration was mandated by the Supreme Court decision inBrown v. Board of Education in 1954. This year MLB’s second annual Civil Rights Game pits the Mets against the White Sox on March 29 in Memphis.

Jimmie Lee Solomon, MLB executive vice president of operations, says that from Little League to high school to college, black participation in baseball is dramatically lower than what it used to be.

“I think there is a direct correlation to the number of African Americans you see on the field, on the diamond to the numbers you see in the stands, you see watching television, and you see buying merchandise,” says Solomon.

It also chokes the pipeline of up-and-coming young players.

“When an African American kid looks up and sees a superstar player on the field or on the diamond or on the court, and that person looks like him or her, they tend to be attracted to that athlete much more readily than to one who does not look like them. They also believe they have an opportunity to emulate that athlete, and they work hard to do that.”

Solomon says the marketing of athletic shoe companies has elevated hoop stars such as Michael Jordan to iconic stature and young players may find the game of basketball more accessible and better suited to urban environments. Solomon adds that the abundance of college football scholarships in comparison to baseball scholarships sways talented high school athletes to pursue that sport.

To start filling the player pipeline, MLB has built the Urban Youth Academy in the heart of Compton, California. The venue of this past weekend’s Urban Invitational games, the Academy operates virtually every day, year-round, providing free baseball instruction to aspiring players and free vocational instruction to future umpires, coaches, groundskeepers, play-by-play announcers, journalists, scouts, and coaches. MLB is already looking to replicate the Academy model in Philadelphia, Miami, and Washington, D.C.