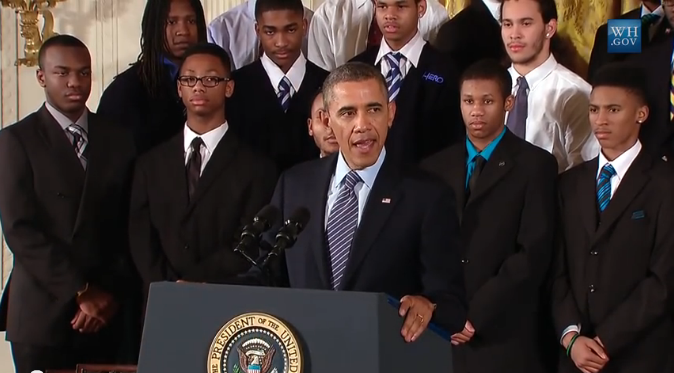 With the release of My Brother’s Keeper 90-day report, President Obama is asking the American community to enter a long-term commitment of mentoring in order to positively impact the growth and success of today’s young men of color.

The call for mentors is one of many actions that the report suggests after three months of research and discussion with both public and private sector groups about the issues facing minority men.

“We believe that the key to working to improve the lives of boys and young men of color, indeed for all of our youth, is to make sure that the communities around them are investing in them,â€ said Broderick Johnson, the chair of the My Brother’s Keeper task force during a conference press call.

The request for mentors is a call of action that’s definitely needed for young men of color, especially in the African American community. According to the 90-day report fact sheet, two-thirds of black and Hispanic children live in a single parent household, with research showing that a father’s absence increases the risk of dropping out of high school for blacks and Hispanics by 75% and 96% respectively. With alarming statistics such as these, President Obama is aware that as a product of a fatherless home, it was the mentors within his family and community that prevented him from becoming a troubled statistic.

“The president talks very personally about his own experiences growing up without a dad and the importance of his grandparents, his mom and others around him that were critical to him growing up to be successful,â€ Johnson tells BlackEnterprise.com. “There is no substitute for a father in terms of the development of a child, especially an African American or Latino child, and yet, we have circumstances where the role of a mentor can be very critical in turning the life around for a young person.â€

In addition to mentorship, the 90-day report also addresses school readiness and the need to eliminate suspension and expulsion in early learning settings, with the U.S. Department of Education Office of Civil Rights reporting that while black children make up 18% of pre-school enrollment, they constitute 48% of students receiving more than one out-of-school suspension. Furthermore, the report outlines efforts to improve the percentage of students reading on grade level, increase the graduation rate and the number of students enrolling in and completing college, and help ease the transition from school to the workforce.

With a need to get more young men of color involved in tomorrow’s workforce, Deputy Secretary of Education Jim Shelton tells Black Enterprise that the initiative also plans to put a special emphasis on the importance of studies in the STEM field.

“We talk about the access to rigorous coursework early and those early internships as mentoring opportunities on the professional side that leads to being able to maintain folks in the STEM careers,â€ Shelton says.

“When you look at the jobs in the future, it’s very obvious when looking at who companies are hiring and where the gaps are, that being able to educate young men of color in the STEM area is really important to the economic viability and competitiveness of the United States,â€ Johnson adds.

With garnered support from public and private companies, as well as celebrity entrepreneurs such as Magic Johnson, the president’s My Brother’s Keeper initiative is one that will surely extend beyond the term of the Obama administration.

“It’s really important to see this 90-day report as what it is. It’s a progress report,â€ says Johnson. “This is also a bit of a marathon and the president sees this as something that we need to do throughout the rest of his administration of course, but then beyond that as well.â€