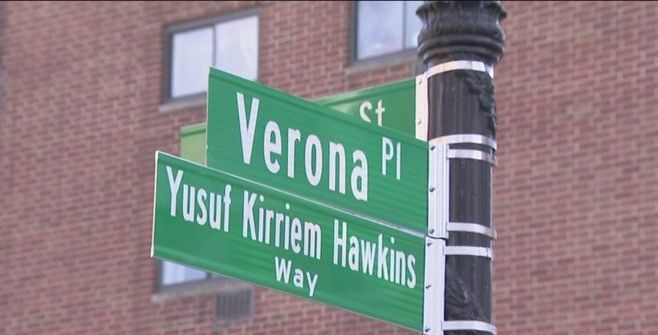 One of the most prominent names among Black victims of racial injustice over the years has had a street named for him in his hometown of Brooklyn, New York.

According to CBS NY, there is now a street in Brooklyn named for Yusuf Hawkins, a Brooklyn man who was shot to death more than 30 years ago in a racially motivated attack in the Bensonhurst neighborhood.

The renaming of the street is located at the corner of Verona Place and Fulton Street in Bedford-Stuyvesant and the renaming dedication took place on what would have been Hawkins’ 48th birthday.

A Brooklyn street was renamed for Yusuf Hawkins on Friday, more than 30 years after he was shot to death in a racially motivated attack in Bensonhurst. @KevRincon reports. https://t.co/tSKf8gUTPq

“Anybody that walks down Fulton Avenue and Verona Place/Yusuf Kirriem Hawkins Way now, hey, take a look, turn to the mural, and look up in the sky because he’s looking down on all of us,” Yusuf’s brother Amir Hawkins said about the honor.

Intersection near #YsufHawkins’ childhood home in #Brooklyn renamed in his honor on what would have been his 48th bday. He was only 16 when a a racially-motivated white mob killed him in #Bensonhurst almost 32 years ago . pic.twitter.com/4JLMQOj3Fy

According to NY1, on Aug. 23, 1989, Hawkins and some of his friends went to Bensonhurst to purchase a used car when a group of white men attacked him with baseball bats because they erroneously thought he was dating a white girl in the neighborhood. He was also shot in the chest which caused his death.

Hawkins’ death sparked outrage and at the time, started a movement against the racism that New York City was experiencing and it helped boost the candidacy of David Dinkins, who was elected as the city’s first Black mayor less than three months later.