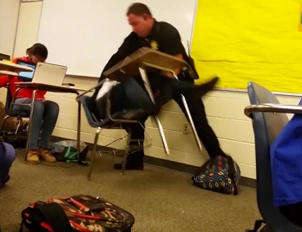 As the video of aÂ South Carolina sheriff’s deputyÂ brutally body-slamming an unarmed black girl goes viral, the public space is spewing outrage with all the force of an exploding volcano. Yet this is not an isolated incident, it’s aÂ longstanding practice that just happened to be caught on film, trapped in the permanence of fastidious Internet record- keeping that won’t go away.

Beyond the anger of the moment and the temporary Twitter rage, the larger issue hangs there because, let’s face it, we’ve known for some time that black youth are routinely shipped off to crowded prisons masquerading as public schools. “School resource officers,â€ as they are softly termed, have become conveniently placed correctional staff prepping the “coloredâ€ kids for prison. Gratuitous violence unleashed on black kids is the norm in American schools.

“The use of school resource officers goes back some 20 to 25 years ago,â€ National Urban League President and former New Orleans Mayor Marc Morial explained to The Daily Beast. “Back then, the focus was just on troubled schools dealing with gang violence and drugs.â€

“But, now you’re seeing them placed everywhere, even in schools where there is no history or pattern of violence,â€ argues Morial. “It’s gone way too far. We shouldn’t have to turn schools into armed camps.â€

For Morial and others,Â school resource officersÂ are at the very tip of that problem, which is a “zero toleranceâ€ approach run amok, with black students getting the worst of it. As the ACLU notes, “policies criminalize minor infractions of school rules, while cops in schools lead to students being criminalized for behavior that should be handled inside the school.â€

African American students are just 18% of the public school population but, as this New York Times investigation sorted out, they’ve become 35% of those suspended; nearly 40% of those expelled.

Read more at the Daily Beast.