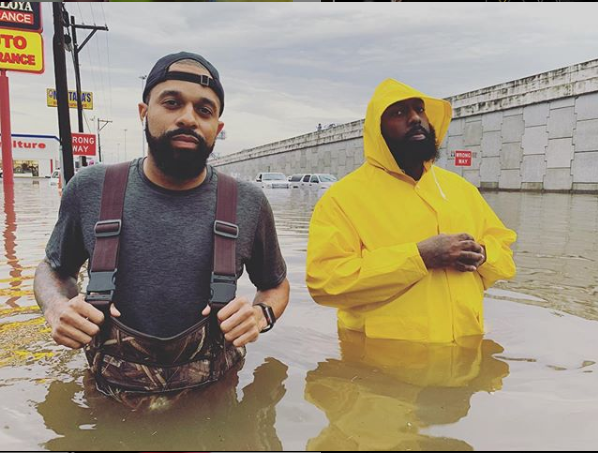 The three rappers partnered with Impact Ministries in Beaumont, Texas, last month to hand out supplies to residents. They were set up at 11th Street and Washington Boulevard in Beaumont to serve hot meals and load up people’s cars with supplies. They not only gave out rations, they went door-to-door to hand them to those in need.

“We don’t have a lot but whatever we have, we’re here to give it to people.” Bun B said to 12NewsNow.

At least five people have been killed and hundreds of homes have been flooded since Imelda hit Texas last week. It’s been reported in USA Today that the storm dropped 43 inches of rain in three days. “It’s a great need here in the city,” said Jay Matthews, the pastor of Impact Ministries, told 12NewsNow. “We’re here to serve. We’re here to help you …Some people have lost everything, and we’re here with them to help them rebuild.”

Last week, Bun B solicited help through his Instagram account: “@reliefgang is heading east to Winnie and Beaumont but Kingwood, Spring and Cleveland have been hit bad also. If you have a lifted truck there are people that really need your help…”

Trae Tha Truth spoke to his followers on his Instagram account to show his dedication to helping those in need, “Alot of people dont understand How Serious These Disasters Are… Thats Why We use or platform to spread awareness for those who need help, and to motivate others to know all help is needed… We decided to show the real things in a Transparent way… i posted footage from What we had on phones and put it on my vevo to allow yall to see everything … We Are One🙏🏿 much ”

Bun B hails from Port Arthur. Trae Tha Truth and Slum Thug are both from Houston.