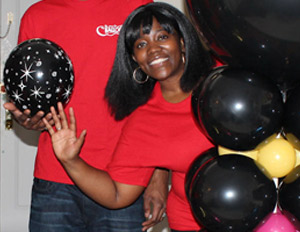 Speller is all smiles at her ballooning business

Shanta Speller leads a double life. By day, she is an associate director of program manager for TIME.com. By night, she turns her focus to her side business, Bunch of Balloons, logging in over five additional hours after leaving her 9-to-5. It was Speller’s encouraging father who instilled this drive in his daughter early on when he said, “You should always have something to fall back on.â€ These words stayed with her well into adulthood. “I knew I wanted to do something on my own, â€ says Speller, 32. “In high school the idea was planted.â€

Coincidentally, it was while planning her 10-year class reunion that sparked her interest in balloon decorating. “I happened to stumble upon a photo of a venue completely decorated with balloons,â€ Speller recalls. “We’re not talking about a few balloons tied to ribbon, this was something I had never seen before. Instantly, I knew I wanted to start a business offering this service.â€

In 2008, Speller enrolled to a one-week balloon-training course, priced at $1,200, where she traveled to Tampa, Fla., to sharpen her skills. But that didn’t come with dedication. After class she’d return to her hotel room and practice each concept. “If I had any questions, I would ask the next day,â€ she says. “Anyone can take a class, but you have to be able to transfer the skills.”

After completing the course, Speller knew how to make centerpieces, arches, columns and sculptures and over-the-top creations, all out of balloons. She returned to New York excited to start her company but with a bit of hesitation. “Sometimes, you slow yourself down because you want everything to be perfect,â€ she says. “You never finish because it’s not perfect. My brother started his own company doing computer consulting and he had business cards and a website in a matter of two weeks. I thought, ‘I have to get my site together.'”

By 2010, Speller did just that launching Bunch-of-Balloons.com, which she designed her self. She used social media platforms like Twitter and Facebook to spread the news. The Pace University graduate also optimized her site for online search engines.

Working on Bunch of Balloons on her spare time, Speller started out earning an additional $600 to $800 per month. As word of her new endeavor grew so did the business. The company made an appearance on VH1’s popular reality show, Love & Hip Hop and Speller’s secured designing for swanky restaurant and lounges in New York, children’s birthday parties and special events for non-profit organizations. Bunch of Balloons even caters to an audience living a green lifestyle.

What does the dedicated businesswoman think about her “ballooningâ€ success? “It feels good,” says Speller. “When you think of places like [New York’s] Bryant Park, I would have never thought that I would be decorating in a spot so popular.” And, to aspiring entrepreneurs, she cautions, “If you don’t have a vision, you’re not going to succeed.â€