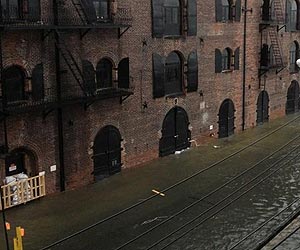 The Red Hook neighborhood of Brooklyn is a bustling hub of small businesses. Restaurants, printing presses, stores and other entrepreneurs have turned the once industrial neighborhood into one of the hottest zip codes in New York. What was once considered a dangerous place is now home to artists, businesses and a flagship IKEA store. The beauty of Red Hook’s location right on the Brooklyn waterfront was also it’s undoing during Hurricane Sandy, as a storm surge submerged many buildings under several feet of water. The neighborhood’s main thoroughfare, Van Brunt Street, was a river on Monday night.

Many owners whose small businesses were damaged by Hurricane Sandy met with New York City officials to hear what relief assistance was available to entrepreneurs. New York City is offering bridge loans of up to $10,000 for areas that need immediate working capital. Red Hook’s local congresswoman, Nydia VelÃ¡zquez, urged attendees to look to the SBA low-interest disaster loans. The loans are available in amounts of up to $2 million dollars over terms as long as 30 years, and are capped at a 4% interest. This is a remarkably good deal for a small business loan and it’s one of the government’s main tools for helping small business owners during disasters.

But many small business owners expressed frustration at the idea of a federal loan.

“Most of us are deeply overextended as it is,” said Monica Byrne, the co-owner of local restaurant Home/Made. “We’re all shut down. We have staff we can’t pay. We really need some support that’s not about loans.”

Many owners expressed similar sentiments, as they’re already strapped for cash and operating with very thin profit margins. Loans are a quick solution but they have to be repaid, and that’s an added monthly burden most owners can’t take on.

While flood insurance could have possibly made this an avoidable situation, many owners explained that while they attempted to purchase it, it was too expensive. Mike Ikhmies, owner of printing firm Eye Graphics & Printing, says the only flood insurance coverage he could find had sky-high premiums and a tiny coverage cap.

“They only went up to half a million,” he said. “The equipment cost $4 million, $5 million. What good would half a million do if things got damaged?”

“There’s contributions, promotions, benefits — it’s going to have to be the old-fashioned way,” he told owners at the meeting.

Some business owners are pooling their resources to help each other.

“It’s a community here, and I’m glad to be among friends,” said one business owner. “I want to be positive about this, but the whole thing is tragic.”

40% of small businesses never reopen after being damaged in floods and many owners seem to realize they’re going to be part of that statistic.