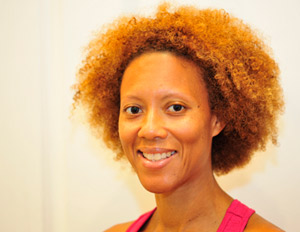 When she was a young girl in Seneca, South Carolina, Qiana Martin‘s mother would show her newspaper clippings of successful doctors and lawyers and eventually athletes and entertainment figures. Martin’s mother could not imagine that years later those clippings would inspire her daughter to leave a position at one of the nation’s top law firms to become an international soccer player. “Unwittingly, she opened the door to me researching what else was out there in the world, and it was motivational.â€

It took some time before Martin was fully compelled to see what else the world had to offer. Initially, she followed the traditional path laid out before her. After graduating from college she began working as a hiring specialist for one of the a law firm in Atlanta, where she earned $40,000 to $50,000 per year.

But, once the clock hit five, Martin would trade in her professional attire for a sports bra, shorts and soccer shoes to hit the ground playing local street soccer games. For Martin, playing soccer reminded her of her first love: sports.

“Sports was something that I was always around. I always ran track or played basketball. It was a stress reliever, but it wasn’t a long-term goal that I saw for myself.â€

That all began to change once she realized that she had skills on the soccer field. She learned to hone her craft and was also introduced to one of the challenges of the career that she was considering pursuing full-time: sexism. As an African-American woman in the street soccer community, she was an anomaly.

“I played with many West Indian and Latin American men, and they didn’t want to pass me the ball,” Martin recalls. “But as I kept showing up and being persistent and making good passes they began to respect me.â€

Finally, after a training session while on vacation in Miami, she decided to put in her resignation at the law firm and fly to Brazil to pursue her dreams — a decision that raised concern from her co-workers and family. “They were shocked. They didn’t know what I expected to achieve,â€ she says.Â  “My grandparents thought that since I had a degree that I should stick to a 9-to-5.â€

Adding to the growing list of concerns was Martin’s age — she was in her early 20s at the time. “Most in this field who start out are 15 or 16 years old, but I felt like I could make a bigger contribution doing something I was passionate about and that small confidence allowed me to pursue this dream.â€

Today, after years on the circuit, Martin competes internationally as a freelance soccer player in locations including South America and Europe.

Martin felt it important to draft a strong financial plan of action, a lesson she learned growing up, knowing she always had to plan ahead when it came to money. “There is no paycheck coming in from one place every week, and that’s forced me to be financially creative, but I am happier.” With her business savvy, she’s developed secondary sources of income through speaking engagements and collaborations with the likes of Fila and British Airways.

Martin adds that the higher earnings potential of her new career path has maximized, and the reward of following her dream offers an infinitely greater return on investment.

In between soccer games, Martin is focused on advocating for Atlanta-based, nonprofit soccer program, Soccer in the Streets, promoting the female soccer documentary she co-produced “The Anderson Monarchs,â€ and on making her dream to represent the U.S. in the 2012 Olympics a reality.

“I know that I’m making more of a difference being able to finance and underwrite nonprofits, and encouraging others to follow their dreams.”