Governor Gavin Newsom Has Given Bruce's Beach Back To Its Owners 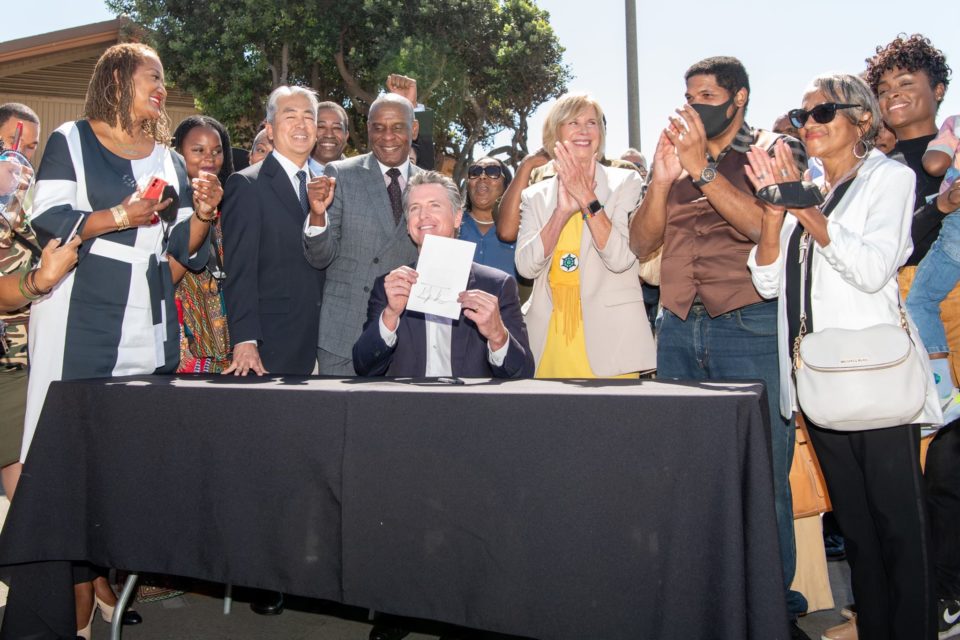 In a historic move California Gov. Gavin Newsom has authorized the return of a property known as Bruce’s Beach to the descendants of the Black family that originally owned it.

Newsom signed Senate Bill 796 in front of an excited crowd and confirmed the city’s taking of the land on which the Bruce family ran a successful Black beach resort, was racially motivated and done under false and unlawful pretenses.

“The land in the City of Manhattan Beach, which was wrongfully taken from Willa and Charles Bruce, should be returned to their living descendants,” the bill states, “and it is in the public interest of the State of California, the County of Los Angeles, the City of Manhattan Beach, and the People of the State of California to do so.”

The bill passed unanimously in the state legislature earlier this month and includes an urgency clause allowing Los Angeles County, which currently owns the land, to begin transferring it to the Bruce family immediately. The move has been celebrated by reparations advocates and social justice leaders across the state.

The story of Bruce’s Beach began receiving attention earlier this summer and got some people in their feelings as community leaders pushed back that residents today shouldn’t be responsible for the injustices of the past while others called for and supported restitution.

The Bruces purchased the land in 1912 and developed it into a beach resort for LA’s Black residents who were faced with intimidation and threats at other locations. However, in 1924 Manhattan Beach’s City Council used eminent domain to take the land from the Bruces, claiming they were using it to build a park.

The park wasn’t built until more than three decades after the land was taken. The county now owns the land and uses what used to be Bruce’s Beach to house its lifeguard headquarters and training facility. The county taking the land had a devastating effect on the Black people in the area. To this day, less than 1% of the population in Manhattan Beach is Black.

During the mid 2000’s, Mitch Ward, Manhattan beach’s first Black Mayor, changed the name of the park to Bruce’s Beach and had a plaque installed to commemorate the Bruces’ effort. However, many criticized the plaque as incorrect and incomplete.

The petition called on Manhattan Beach Mayor Richard Montgomery and the City Council to restore the land to the Bruce family, provide restitution for 95 years of revenue losses, and pay monetary damages for the violation of the Bruce’s civil rights.