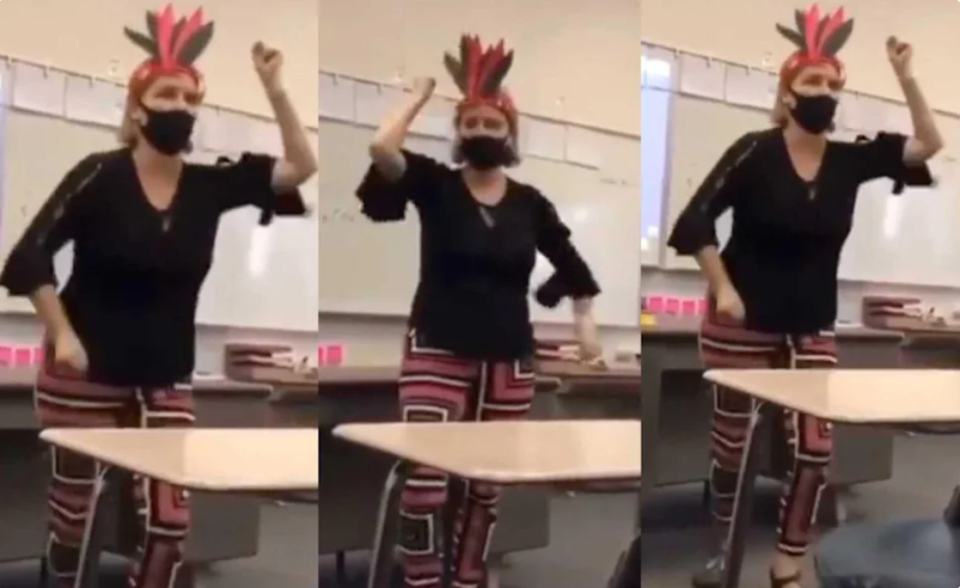 A white California teacher is on paid leave after a video of her appearing to mock Native American culture went viral.

After a student-captured video of her dancing in Native American-inspired headgear, ABC7 reports, Candice Reed was placed on leave from North High School in Riverside. The district is investigating after the math teacher put on a headdress made of fake feathers and made tomahawk motions while chanting “soh-cah-toa.”

As noted by Yahoo, the chant names the mnemonic device often used to learn the trigonometric functions sine, cosine, and tangent. But Reed appeared to find her own way to teach this information to her students by using a fake headdress and mocking an entire race and culture.

“A recording of one of our teachers has been widely circulated on social media,” the Riverside Unified School District Administration said in a statement on Thursday. “These behaviors are completely unacceptable and an offensive depiction of the vast and expansive Native American cultures and practices.”

“Her actions do not represent the values of our district. The teacher has been placed on leave while the District conducts an investigation.”

Video of the incident went viral on social media, with many blasting Reed for the blatantly racist behavior.

But while the district says Reed’s actions don’t represent their values, Twitter users claim the behavior has occurred at the school dating back nearly 10 years.

One photo even shows Reed’s chant included in an old yearbook.

John W. North High School shared this from a 2012 yearbook. This teacher Candice Reed has been doing this for awhile now. CLEARLY the school was fully aware of what she’s been doing and fully approved of this mockery. This is 2021 & we will find the truth to your lies. pic.twitter.com/aPfcqQunY4

Meanwhile, the district claims they only promote inclusive practices at their schools.

“We are deeply committed to implementing inclusive practices and policies that honor the rich diversity of our district and the greater region,” the district said. “We will be working with our students, families, staff, and community to regain your trust.”