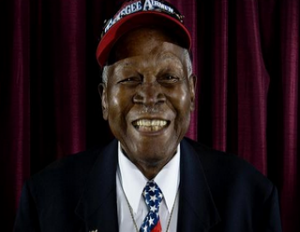 Lt. Calvin Spann, a Tuskegee airman and fighter pilot, died Sept. 6 at his home, according to a news statement. He was 90.

Spann became an original airman and fighter pilot with the 100th Fighter Squadron of the 332nd Fighter Group after receiving his wings from the Tuskegee Flight School. He was part of an elite class of African American pilots, and he served in Europe during World War II, flying 26 combat missions in Europe.

Up until his death, Spann was very active in his community, speaking at schools, churches and organizations about his experience as a Tuskegee Airman.

Public memorial services for him were held in Texas, where family, friends, fans and legislators honored his legacy:

After the war, Spann faced challenges due to segregation, and was able to find work in a factory before eventually moving on to became a sales representative for Roche pharmaceuticals. During his sales career, he owned a restaurant-bar and was a real estate broker.

President Bush awarded him and his fellow Tuskegee Airmen the Congressional Gold Medal in 2006.

He is survived by his wife, Gwenelle Spann of McKinney; daughters Gai Spann of Brooklyn and Carla Spann-Lopez of Allen, Texas; a son, Calvin J. Spann Jr. of New York; and three grandchildren.