Cam Newton is the Black QB That Nothing Compares To 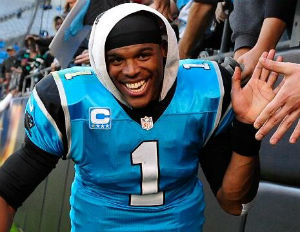 This story originally appeared on www.theshadowleague.com.

Cam Newton is on the verge of completing an amazing year.

In his fifth season, he was voted the 2015 NFL Most Valuable Player and Offensive Player of the Year by the Professional Football Writers of America (PFWA), the first member of the Panthers to earn that MVP award.

He’s also the recipient of additional honors including the AP All-Pro First Team, Sporting News Offensive Player of the Year and Sporting News All-Pro. While many expect him to win the League MVP award, and rightfully so, the biggest award sits one week away from his grasp.

But while the accolades have been great and the support strong, the hate has been right there as well, and yesterday Cam finally addressed it point blank via The Charlotte Observer.

They criticize his dabbing but don’t appreciate his gifts to the community. They slam him for his perceived cockiness but don’t compliment him for his humbleness and caring. He’s a cultural phenom that has forced the NFL and the media to embrace a new way of thinking. He is a lightning rod that no one understands except those who truly understand and can filter out the ignorance.

“Whether you win, lose or draw, people are going to talk,â€ Newton said.

“Now the true fans–they know what’s up. They’re going to be supportive whatever happens…. But people are going to judge and have their own opinion on certain things that I don’t have control over nor does anybody else.â€

You can tell Cam is comfortable in his position as a black quarterback, as a team leader and now as a father. Remember, he didn’t even mention his newborn son because he didn’t want it to be a distraction to the team. Even if you hate on him, you can’t hate on his numbers or what his presence on the field means (ask the Cardinals).

So they can continue to call him names, put him down, say he’s not as good as other QBs and blah, blah, blah. His teammates and fans will continue to support him–all the way to the Super Bowl and beyond.