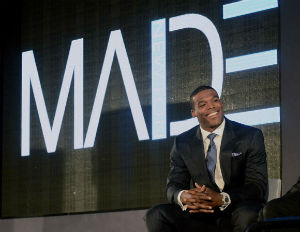 Carolina Panthers star quarterback Cam Newton and Charlotte-based Belk Inc. are teaming up to produce a clothing line called MADE, it was announced Monday.

Last year’s AP Offensive Rookie of the Year is already one of the league’s most recognizable figures. Newton, the 2010 Heisman Trophy winner, also has endorsement deals with Under Armour and Gatorade.

While he’s clearly scored another business victory, wins on the field have been harder to come by. On October 7, the Panthers dropped to 1-4 on the young season, falling 16-12 to the Seahawks at Bank of America Stadium.

“Without football success, I wouldn’t have this opportunity,” Newton told the News & Observer. “That will always be my No. 1 priority. I still feel 100 percent confident our goals are in reach.”