BE Global: From Cameroon to Germanyâ€™s Tech Startup Industry 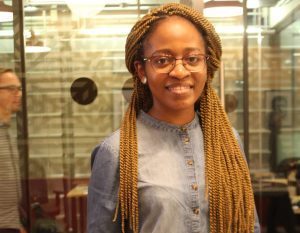 Walk into WeWork in Berlin and it has very much the same tech startup vibe as other co-working spaces in the United States. The majority of occupants are young, (mostly male), with plenty of office space, lounging sections, and beer.

While the tech startup culture demographically mirrors the tech hubs in the United States, namely, white and male, wandering throughout the spacious, multi-level WeWork space provides some sightings of people of color and women furiously at work launching their own dreams.

Asheh Takeh is one of those people. The young woman migrated from Cameroon to Germany about five years ago.

Demure and petite, with a headful of stunning braids, Takeh stands out among the mostly European young men dressed in jeans and hoodies.

“I came here five years ago to study,â€ says Takeh. “I obtained my Master’s in International Economics.â€

“I wanted to study abroad,â€ she says. Her parents were willing to support her in that endeavor and she first considered heading to the U.K. or the U.S.

If she opted to study in Britain, she would have been unable to work and go to school based on regulations there, she explains. And in the U.S.,”school was too expensive.â€ Her friends who went to study in the U.S. are still trying to pay off their students loans from almost six years ago.

Germany had the best offering. She could work while attending school, affordably. Germany also has a vibrant Cameroon community, so Takeh felt she had a support system.

Additionally, the country has a program exchange network called CIM. It provides funding to African students so they can return to their countries to work, do research, or volunteer.

“It’s the idea of tackling ‘brain drain,’â€ says Takeh–the loss of educated citizens from countries where their skills are desperately needed after young people leave to study abroad and often never return home.

Currently, Takeh is the executive assistant of a promising tech startup, MBJ. The company offers a fully integrated website platform for small-and-medium sized business to create polished, mobile-optimized websites at a low cost.

She has worked there for three months. She is interested in working in business, and hands-on experience with working for a company that is building itself from the ground up is a great foundation for her career.

For her, the German tech startup scene has a “great atmosphereâ€ and she says she works with a great team. She feels comfortable in Berlin due to its multiculturalism. While she does intend to return home in the future, for now, she is happy with the decision to come to Germany.

“My friends are from Cameroon, but I have German friends as well,â€ she says.

Castro Did Business With Black Farmers, Not the U.S. Government

International Air Travel You Can Afford

FacebookTwitterYoutube
← Castro Did Business With Black Farmers, Not the U.S. Government ← International Air Travel You Can Afford
×
'