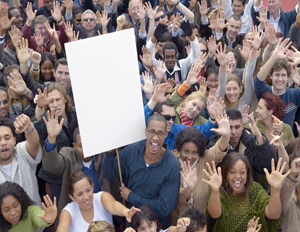 A new study from theÂ American Council on EducationÂ says thatÂ student-led protestsÂ are having an impact on college and university campuses across the country.

“Racial Climate on Campus: A Survey of College Presidentsâ€Â anonymously surveyed 567 college and university presidents to uncover how they feel student activism is changing the way students and faculty alike address race-related issues.

[Related: How Many Protests Will It Take to Finally Diversify Our Campuses?]

The results show that students at nearly half (47%) of the four-year institutions surveyed have organized around racial diversity concerns. And 75% of the folks presiding over four-year programs say that campus events related to Black Lives Matter, immigration, and Islamophobia have increased the racial dialogue at their school. That number drops to 62% at two-year schools.

While one president reportedly wrote: “The national issues have manifested at my campus as a genuine focus on eliminating the disparity in student academic achievement by ethnicity and on being more proactive in diversifying the faculty,â€ the increase in conversation has only led to modest administrative action.

On four-year campuses, just 55% of presidents said that the racial climate has become more of a priority, and 1% said its importance has actually decreased. Just 44% of leaders on two-year college campuses feel that it is more important now than three years ago.