Can Your Self-Driving Car Kill You? 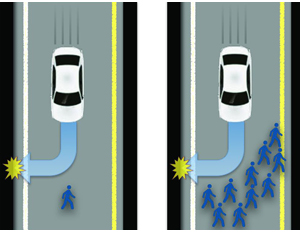 It’s 10 years from now, and you are riding along in your self-driving car. You could drive manually, but it’s your morning commute;Â you let the vehicle auto-pilot so you can get a jump on the day’s work.

Suddenly,Â five children race out into the middle of the street, chasing a ball.

The only way to avoid hitting the children is to swerve into a side concrete wall running parallel to the street–and doing so will likely result in your instantaneous death.

Moral Dilemma of the Self-Driving Car

Should the self-driving car be programmed to protect you at any cost or avoid killing a bunch of kids?

The consensus is that self-driving vehicles will reduce traffic fatalities. However, situations will arise where these vehicles will have to choose between two evils, such as running over pedestrians or sacrificing themselves and their passenger to save the pedestrians.

In a scientific abstract,Â The Social Dilemma of Autonomous Vehicles, researchers conclude, “Defining the algorithms that will help [autonomous vehicles] make these moral decisions is a formidable challenge.â€

How Many Feel About the Matter

Researchers also conducted a series of surveys to get an idea of the public’s views on ethics and self-driving vehicles.

As autonomous vehicles are destined to eventually overtake the roads, “Serious consideration of algorithmic morality has never been more urgent.â€