How This Washington D.C. Couple Got Their 'Mumbo Sauce' in Stores 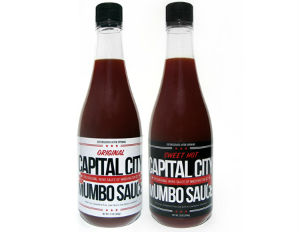 Many entrepreneurs dream of getting their products into large retail stores. A key strategy is to start small and expand your customer base. That’s the approach Arsha and Charles Jones, 36 and 40, are taking. The Washington, D.C., area natives are the proprietors of Capital City L.L.C. which makes Capital City Mumbo Sauce.

The sweet, tangy condiment similar to barbecue or plum sauce is a staple wing sauce in the District. The husband-and-wife team started out selling their mumbo sauce online but now sells it in about 18 retail stores in the Washington, D.C., metro area; the sauce is also on the menu at three restaurants. “We decided that we would get into local retailers first, instead of going after big box stores,â€ says Arsha.

Generally, big box retailers will not sell a new item without seeing how it has performed for smaller retailers. Ideally, buyers want to see one to two years of sales history that reflects healthy, consistent sales.

RELATED: How to Succeed in the Food Truck Business

In addition to selling online, the Joneses peddled their wares at a local farmers market. There they met and eventually partnered with the only other African American vendor at the market, a local poultry vendor that sells organic, free-range chicken. Murry’s, a retail food store and the couple’s largest client, carries the mumbo sauce in about 11 of its stores.

The couple first came to make their home-style mumbo sauce after they had difficulty finding it in the suburbs. Wondering if other people in the area were also looking for it, the couple went online and discovered that they were. They compiled a mailing list that they maintained for six months. After identifying an online retailer that sold bottles wholesale, the husband-and-wife team were soon making the sauce on their kitchen stove and selling directly to consumers. They did the bottling, labeling, and shipping themselves.