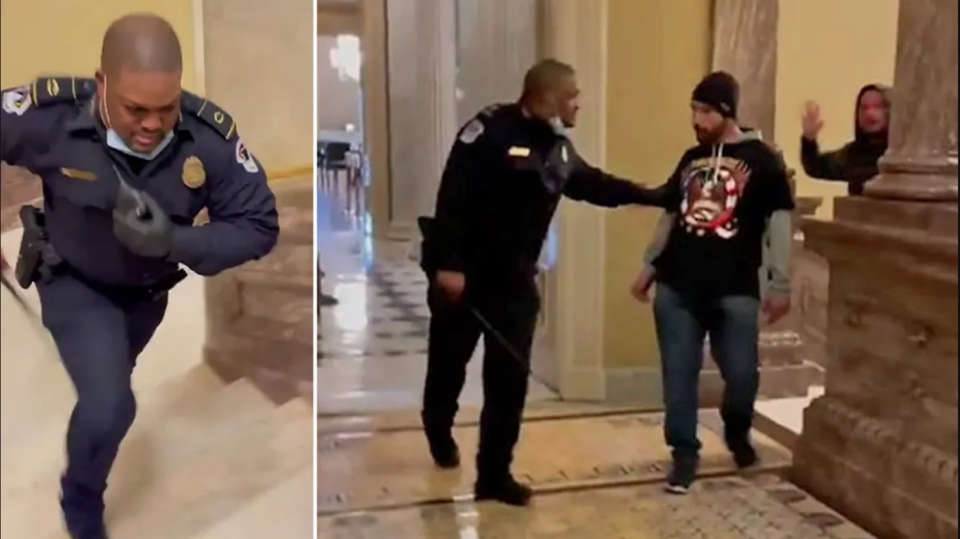 U.S. Capitol Police Officer Eugene Goodman, who helped protect politicians from Capitol rioters during the Jan. 6th attack, testified Wednesday at the trial of one of the men who stormed the Capitol.

NBC News reports Goodman testified at the trial of Doug Jensen, an Iowa resident who was among the first 10 people who entered the Capitol through a broken window according to the Justice Department.

Jensen has been charged with numerous offenses including civil disorder, obstruction of an official proceeding and resisting officers.

At the trial, Goodman told jurors he’s been a Capitol police officer for 15 years and on Jan. 6 he was assigned to the Capitol Rotunda guarding the path Senators and House members use to move between chambers. The Army veteran added that he eventually went outside with one of the first people to be detained that day to a transport van and upon returning to the west side of the Capitol, discovered a battle between the rioters and overwhelmed police officers.

According to Goodman, it wasn’t long after that he found himself fighting off rioters with nothing but a can of pepper spray and a baton. Goodman testified that he saw a crowd of what “looked like thousands”  overwhelm police and climb scaffolding before heading back to the Rotunda after hearing the group breached the Senate.

In the Rotunda, Goodman ran into Utah Sen. Mitt Romney (R) and told him to go back the way he came because the mob breached the building.

Goodman also testified that he was hit in the face with bear spray by rioters, hit with tear gas, and a man holding a confederate flag tried to stab him with it. The veteran added that he stayed at the Capitol past midnight to help clear rooms and escort a Senator out of a hideaway office.

Jensen has been in custody since last year when the judge ordered him to be detained after the Capitol rioter was discovered in his garage trying to stream a cyber symposium led by MyPillow Founder Mike Lindell.

According to Jensen’s defense attorney Christopher Davis, the Iowa resident genuinely believed in QAnon and its conspiracy theories including that law enforcement would arrest corrupt politicians.

“He’s not terribly sophisticated,” Davis said about his client, adding Jensen went down a rabbit hole when he got sucked into QAnon theories.

After the Capitol riot, Goodman was honored for his heroics by Congress and was called on to escort Vice President Kamala Harris to her seat for the Presidential Inauguration. The FBI has arrested more than 850 people in connection with the Capitol riot.