5 Reasons It's Best to Hush Up in the Office 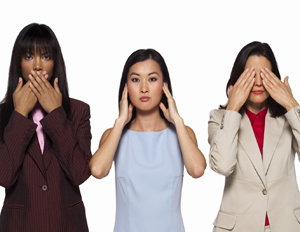 From The Onion’s inappropriate Tweet about 9-year-old actress Quvenzhane Wallis to Kanye West’s rants at his performance to the editor-in-chief of Jet magazine’s public apology for Facebook comments, it’s clear that personal opinions are sometimes best when they are not made public. Below are five reasons staying mum is a good idea:

The impact could mean more damage than good. It’s always important to think about how your words will impact others before you say them. The workplace is usually made up of people from various cultures, religious backgrounds and geographic regions and it’s not good for business to offend a coworker with a comment that caters to your personal opinion and experiences.

It’s never a good look to have to keep apologizing. No one wants to be put on the spot about their wrongdoings, especially in a professional setting. So rather than making a comment that will cause you to have to apologize later, just think ahead whether that comment is even worth stating.

Too many bad distractions can equal diminished credibility: The workplace is not a space that’s meant for everyone to know about your personal opinions. Instead of pushing your beliefs on those around you—unless you’re paid to do that—focus on the quality of work that needs to be done and find other ways to sound off outside the office.