Careers in Faith: Reverend Infuses the Power of Femininity in Ministry 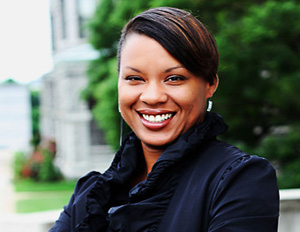 The Rev. Deborah M. Martin wears 5-inch heels and rocks a fierce Mohawk, all while boldly and humbly maintaining her reputation as a prolific preacher in the male-dominated world of ministry. In addition to serving as pastor of the New Chestnut Baptist Church in Richmond, Virginia, Martin is also coordinator of graduate admissions and development for the Samuel Dewitt Proctor School of Theology of Virginia Union University, Martin takes the lead on directing their recruiting, marketing, admissions, alumni relations, and job placement initiatives for their diverse student body.

From the Desk to the Dorm: Martin began her career in ministry through education.Â  After earning her bachelor’s degree in public relations from the University of North Florida, she became an active member of the Bethel Baptist Institutional Church in Jacksonville, Florida, where she says she got her calling. Though she wasn’t exactly sure about where her career was headed, she knew that it would require formal education and training.Â  So, she quit her job as college recruiter, packed up her apartment in Florida, and ventured to enroll as a full-time seminarian at Virginia Union.Â  At the beginning of her seminary experience, she was certain that her calling was to become a counselor. However, over the course of her studies, she says she learned that God was in fact calling her to preach and pastor. Since that time, Martin has worked in various capacities to strengthen and build churches and communities throughout the country.

A Resource for Seminarians: In 2007, Martin began her professional role at the Samuel Dewitt Proctor School of Theology of Virginia Union University, which boasts an alumni list including Bishop Rudolph W. McKissick, Jr., John E. Guns, Ph.D., and Cpt. Brenda Bradley-Davila, U.S. Navy chaplain. Martin coaches more than 380 students, along with the thousands of applicants from around the world who cross her path each year. A ministry all on its own, Martin is certain that her purpose is to be a resource for today’s seminarians.Â  She is most rewarded by seeing the success of those who cross her path and is humbled by their gratefulness for her support.

A Woman in a Man’s World: Martin has experienced firsthand the intolerance of women in ministry but doesn’t let the opinions of others stop her from doing what she was called to do. She makes it a point to never be aggressive, defensive, or confrontational about being a woman in ministry.Â  “I have this philosophy about taking my text, preaching, and sitting down,â€ she says. “Sometimes we do more damage by executing our assignment with an attitude instead of just doing what God has called us to do in that moment.â€Â  In this light, Deborah seeks to never apologize for who she is.Â  She embraces her femininity and counts it as part of her ministry and brand.

Ministry… of Motherhood: As the mother of two beautiful daughters, Martin considers raising her 6-year-old and 4-year-old daughters as her first priority. The demands of ministry can cause many to take on too much at once, but Martin finds support in her family.Â  “I can’t possibly do this without a support system,â€ she says. Martin has learned the significance of delegation and is now better able to share some of her many responsibilities, both as a pastor and as a mother.

She also recently enrolled at United Theological Seminary to pursue a doctorate degree in ministry, making it even more important to schedule out her day appropriately so that some work is done for each area of her life at some point every day.

Brand of Women’s Empowerment: Martin says she’s committed to setting an example for younger women in ministry. She had to learn many lessons by overcoming challenges herself, so, she seeks to become a greater resource for those who want to pursue careers in ministry.Â  “I love being a woman. I’m not scared of being a woman,â€ she says. “I know this is what God called me to do and because of that, I am guided by God on how to get it done.â€