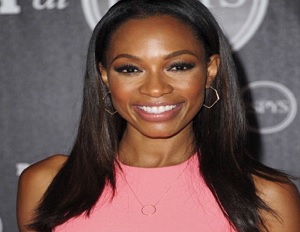 “I grew up watching ‘SportsCenter’ — it is the flagship show so I am living the dream,” Champion told TheWrap. “When I first started working here, I would casually petition for it — but there’s always a long line.”

At the First Take desk, Champion worked alongside Stephen A. Smith and Skip Bayless and often found herself in the middle of heated debates between the two outspoken co-hosts.

“I realized it was going to be a tough gig as I had the biggest, strongest personalities in the building,” she said.

Prior to joining ESPN in 2012, the UCLA alum was an anchor and court-side reporter at the Tennis Channel. She also served as an entertainment/lifestyle reporter for The Insider, Hollywood 411 and Starz Entertainment.

Champion’s last day on First Take was Friday, and while she expressed how much she loved her time on the show she made it clear that she was ready for something new.

“I’ve reached my ceiling. The growth for me has stopped in the middle seat,” she said. “Now it’s time for me to stretch my wings.”