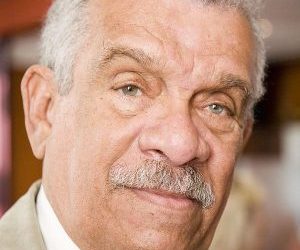 Derek Alton Walcott, a renowned poet who received theÂ Nobel Prize in Literature in 1992, died at the age of 87, on Friday morning. Walcott was atÂ his home in the eastern Caribbean island of St. Lucia with a longtime companion at the time of his death.

According toÂ Jeff Seroy, a spokesman for publisher Farrar, Strauss and Giroux, Walcott died around 5 a.m. after falling ill and returning from a hospital stay. The cause of death, however, was not immediately known.

Walcott’s death was first confirmed by his son, Peter, early Friday morning. His family later confirmed that his funeral would be held in St. Lucia, in addition to releasing this statement, as reported by theÂ Los Angeles Times:

Walcott was born January 23, 1930, on St. Lucia. He was raised by his mother, aÂ schoolteacher, following the death of his father, who passed away while he was still a baby.

As noted by The New York Times, Walcott’s writings are celebrated as a powerful voice in CaribbeanÂ literature:

“Mr. Walcott’s expansive universe revolved around a tiny sun, the island of St. Lucia. Its opulent vegetation, blinding white beaches and tangled multicultural heritage inspired, in its most famous literary son, an ambitious body of work that seemingly embraced every poetic form, from the short lyric to the epic.

With the publication of the collection ‘In a Green Night’ in 1962, critics and poets, Robert Lowell among them, leapt to recognize a powerful new voice in Caribbean literature and to praise the sheer musicality of Mr. Walcott’s verse, the immediacy of its visual images, its profound sense of place. He had first attracted attention on St. Lucia with a book of poems that he published himself as a teenager. Early on, he showed a remarkable ear for the music of English–heard in the poets whose work he absorbed in his Anglocentric education and on the lips of his fellow St. Lucians–and a painter’s eye for the particulars of the local landscape: its beaches and clouds; its turtles, crabs and tropical fish; the sparkling expanse of the Caribbean.”