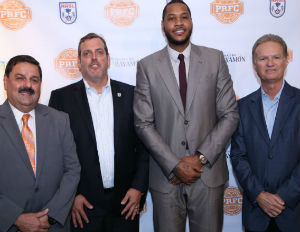 Last week, Carmelo Anthony made the investment of a lifetime. The perennial NBA All Star, and budding entrepreneur, became the owner of the latest NASL expansion franchise, Puerto Rico FC.

Making the announcement in Bayamon, Anthony spoke about his relationship with the Puerto Rican community, as well his roots to the island.

“It is an honor for me to bring back soccer to Puerto Rico, my beloved island, birthplace of my father, and a special place that, as you know, I carry with pride in my heart and soul,â€ Anthony said. “Through my foundation, I have been coming to Puerto Rico for the past six years, restoring basketball courts in underprivileged communities. Today, I come back to the island – this time with the commitment of restoring professional soccer in Puerto Rico through the NASL.â€

The NASL is a division two American soccer league, under MLS, and currently consists of 11 teams – although there are two planned expansion teams for next season, which are Miami FC and Anthony’s Puerto Rico FC. Per a release from the event, the club will play its home matches at the recently renovated Juan RamÃ³n Loubriel stadium in BayamÃ³n – which is about 10 miles from the capital city of San Juan; the 12,500-seat stadium currently serves as the home base for the Puerto Rico national team.

“The NASL is honored to return to Puerto Rico, where the passion for soccer is extraordinary,â€ said NASL Commissioner Bill Peterson. “The addition of Puerto Rico FC is another exciting step for the league, and the club will play a key role in the growth of the game, not only on the island, but also across the Caribbean and North American regions.”

Anthony and his wife, business woman and media personality, La La Anthony, are both of Puerto Rican descent and maintain strong ties to the island. Speaking with ESPN about how often he’s able to visit – with his busy schedule as a professional athlete, husband, and father – Anthony said, “I spend a lot of time in the off-season there, three weeks at a time. I train down there. That’s like my third home after New York and L.A. I go down there to train and just to focus and lock in.â€

As the 31-year-old Anthony recovers from a season-ending knee surgery, he and fans alike are looking ahead to next season and the rebuilding of the Knicks team, which just recorded the worst season in team history. When asked about the details of how much the team cost, Anthony was tight-lipped, but offered that “itÂ was nowhere near MLS.”Â According to the latest contract data, this year alone, the Knicks franchise player will take home over $22 million in salary alone.

While this is a new addition to his already loaded resume, Carmelo says his new role as team owner will not distract him from his on-court duties. “Basketball is my No. 1 thingâ€, he said during a conversation with ESPN. “I’m very hands-on, but it’s more about taking the time now during the off-season. I spend a lot of time in Puerto Rico, training. I’ll do like a mini-training camp down there. Right now it’s about putting the right people in place so that when I’m back to my regular job, basketball is my main focus. I’ll have a solid group of people running it on a day-to-day basis.â€