Carmelo Anthony Teams Up With Nickelodeon 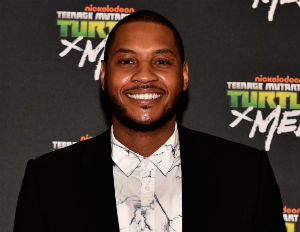 Carmelo Anthony is arguably one of the best players in the NBA, being named to multiple All Star and All NBA teams, as well being a key member on two of the United States gold winning Olympic teams. The husband, father, superstar, gold medalist, and entrepreneur, announced yesterday that he’s adding another title to his already impressive list – Creative Director.

Yesterday during an appearance at the Licensing Expo in Las Vegas, Anthony and Nickelodeon announced plans for a partnership to create ‘Turtles by Melo’, a brand-new consumer products line inspired by the ‘Teenage Mutant Ninja Turtles’ hit franchise. The details, announced in a press release, offer that the ‘self-professed’ [Ninja] Turtles super-fan, Anthony would serve as Creative Director of the global program which will offer products spanning lifestyle, home furnishings, publishing, video games, and more.

“I am so excited about the opportunity to work with the Nickelodeon team on this new Turtles venture,â€ said Anthony. “The Turtles were such a huge part of my childhood, so to now be partnering with Nickelodeon on ‘Turtles by Melo’ is honestly something I never could have imagined.â€ Speaking to The Hollywood Reporter, Anthony added, “I watch with my sonâ€.

According to the announcement, ‘Turtles by Melo’ is expected to debut in spring 2016, in advance of the summer theatrical release of Paramount Pictures’ sequel to Teenage Mutant Ninja Turtles, and in addition to Anthony’s role as Creative Director, he will make a special guest appearance in next summer’s sequel to Teenage Mutant Ninja Turtles, the follow-up to Paramount Pictures’ blockbuster 2014 hit. The NBA Superstar will also be a featured part of the second annual Nickelodeon Kids’ Choice Sports, live from LA, Thursday, July 16.

Pam Kaufman, the chief marketing officer and president of the consumer products division of Nickelodeon, thinks Anthony brings something special to the partnership in that he’s an honest fan of the franchise; “Turtles is a franchise that continues to be relevant to the people who grew up with it in the ‘80s and also to kids today through our TV series on Nick. Carmelo watches the show with his son, which is right in step with how people watch and share their love for these characters. Â He really embodies the Turtles’ multi-generational appeal.â€ Regarding the added allure of his massive influence, she says, “Carmelo is ideal for this new consumer products line because he is genuinely a super-fan, and of course he’s an iconic celebrity with global appeal… His association can further elevate awareness of the franchise and turn up the cool factor even more.â€

Details of the terms of the partnership haven’t been released, but the Teenage Mutant Ninja Turtles remains a massively successful franchise 30 years after their first comic book appearance. According to reports, last year the rebooted film brought roughly $485 million in the global box office, and $1.5 billion worth of retail sales. To-date, the franchise has earned more than $3 billion in global retail sales.