DeAngelo Williams Dyes Hair Pink in Honor of his Mother 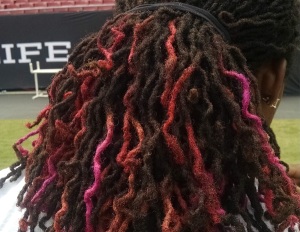 According to the NY Daily News, Carolina Panthers’ running back, DeAngelo Williams, has dyed his hair pink and painted his toenails the same color. The NFL player took those actions in honor of his mother, who died of cancer earlier this year.

Sandra Hill died of breast cancer in May, and Williams is honoring his late mother and raising awareness of the dreaded killer. He also had four aunts die of cancer as well. He wrote an article in May for TheMMQB.com, detailing the fight his mother had.

ESPN’s Adam Schefter tweeted out a picture of Williams getting his hair dyed and one of his new toenail polish.

New Witness Claims Michael Brown Was Shot With ‘Hands Up’