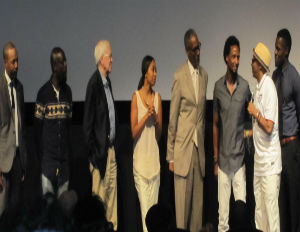 The world premier of the latest Spike Lee Joint, the Kickstarter funded, “Da Sweet Blood of Jesus” happened Sunday June 22rd at the 18th annual American Black Film Festival in New York. It’s the first time the festival is going down in the Big Apple.

Black Enterprise was media sponsor for the festival.

This Joint is unlike any other movie Spike has directed before. But if you’re looking for spoilers, you’re not going to get them here.

What we can tell you is that it’s an artistic, cinematic experience by a genius movie director and completely open to interpretation. Suffice to say in this film, which is beautifully shot, by Dan Patterson, meticulously edited by Randy Wilkins and wonderfully scored, its “less sacrilegious to drink blood, than to spill it”.

But “it is not a vampire movie”. It’s an adaptation of the 1973 cult classic, Bill Gunn‘s, “Ganja & Hess“. Back when that movie opened it also had to fight the vampire connotations the whole way and “all the white critics hated it”.

RELATED: Hollywood’s Leading Men Talk the Influence of Black Males in in Media at ABFF

At a lecture at Harvard, Lee cited the film as one of his favorites, in essence the starting point for his contemporary feature. Today Ganja and Hess is being screened in London, Denmark, Norway and other European countries.

One interesting note on the movie score and soundtrack which, frankly, is mind-blowing. It was scored by the great Bruce Hornsby, with music by Raphael Saadiq. Lee wanted Saadiq to do all the songs but faced static with the record labels. So keeping with the independent spirit he put a call out on social media to unsigned artists around the world. 800 songs were submitted. Lee says he listened to all of them, narrowed them down to the 12 you hear in the movie. He played them for LA Reid with Epic Records and they assembled the soundtrack.

Like we mentioned, you won’t get spoilers here but here’s what the cast and production crew had to say about the film, bringing the American Black Film Festival to New York City and the whole Kickstarter thing.