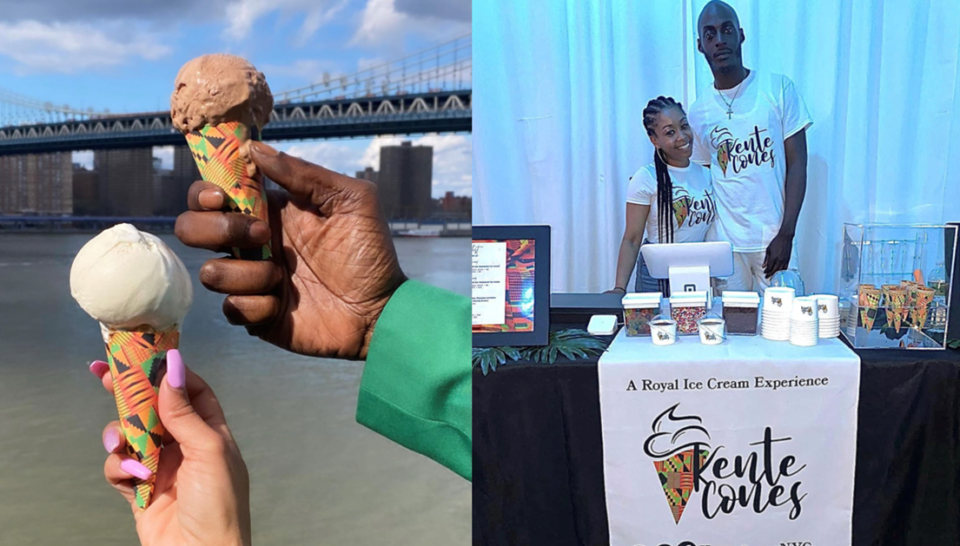 When Walmart attempted to capitalize on the upcoming Juneteenth holiday by releasing its Juneteenth Great Value ice cream line, the Black community went into an uproar.

The retailer immediately pulled the product from their shelves, leaving many to reflect on how the conglomerate missed an opportunity to get behind a Black-owned brand and launch a product by a Black-owned business.

And there are plenty of businesses like Kente Cones, an upscale handmade ice cream brand in Brooklyn, New York, that authentically honors Black culture.

Kente Cones was founded by close friends Ashley Marrero and Charles Asante, who set out to distinguish their line apart from other ice cream shops.

Asante drew inspiration for the brand idea in 2017 when his ex-coworker opened a Black-owned ice cream shop in the neighborhood, causing him to hit the drawing board. He gave tremendous thought to a potential name with an Afro-centric title and decided on the word Kente drawing upon his father’s background.

“My Dad’s from the Ashanti region in Ghana, where the Kente pattern was created 400 years ago in his village. So I expressed to Ashley, my best friend since 2004, my dreams of opening up the ice cream shop, and she instantly fell in love with the whole idea,” he said, adding that they both decided to establish the new venture as partners.

Asante wanted to make a statement and chose to promote an African aesthetic by wrapping the cone in a Kente cloth. In addition, the pair made sure to incorporate significant moments in Black history to designate most of their frozen treats and provide a learning experience for children.

For example, Asante sources the flavors, like their cocoa powder from Ghana, and their Ashanti sorbet pays homage to Asante’s father, who is from the Ashanti region.

The Bobby and Huey Crunch, the cookies and cream flavor, honors the legacy of the Black Panther founders, Bobby Seale and Huey P. Newton, and their vanilla flavor is Le geste d’Edmond, which is French, meaning “Edmond’s gesture.” Edmond Albius was a 12-year-old enslaved African boy who discovered vanilla in the 1800s.

Kente Cones also has vegan options, uses fresh ingredients from local farms, and has other flavors infused with alcohol. “We are taking pride in using alcoholic beverages made by Black-owned companies. We have the Brooklyn swirl, which is our Caramel Swirl. We have our Frosé, made with the Black girl magic rosé. We try to keep the group economics intact,” explains Marrero.

“Also the Wah Gwan, that’s our top seller, that’s the Rum and Raisin, and we are infusing with Wray and Nephew Rum,” a Jamaican rum brand, leaving many customers raving, he says.

They offer Ghanian hot chocolate, Ethiopian coffee, and herbal teas for their beverages.

Currently, they sell their desserts at pop-up shops and festivals. However, as business partners, Marrero and Asante plan to open a pop-up speakeasy where customers can enjoy ice cream in the front and take advantage of the bar, vies, and music in the back.

“You will have to be a part of the family [by] signing up to be a part of our loyalty program, and that way, you have access to the Backroom,” Marrero informs, borrowing the name from the room Asante had back in the day that she often visited.

They also seek to grow nationally and arrange to have their flagship locations and a spot in Africa too. Furthermore, Asante announced that customers could expect pint sizes of their ice cream by the summer.