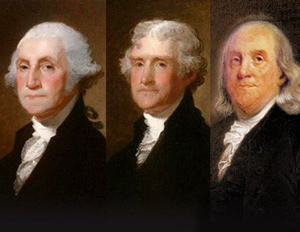 Thomas Jefferson is known for the famous quote, “Agriculture, manufactures, commerce and navigation, the four pillars of our prosperity, are most thriving when left most free to individual enterprise.”

Since 1964, SCORE has helped more than 9 million aspiring entrepreneurs. Each year, SCORE provides small business mentoring and workshops to more than 375,000 new and growing small businesses. Today, the organization celebrates Presidents Day and pointed out examples of how our Founding Father’s can serve as role models for small businesses across the nation.

George Washington has been called “one of America’s leading entrepreneurs,” and was credited with running a fishing operation, flour mill, and whiskey distillery. He was responsible for transforming his small Virginia farm of Mount Vernon into an industrial village. Washington exported his goods throughout the 13 colonies, the West Indies and Europe.

Alexander Hamilton established the Bank of New York which continues to operate to this day. Even more significant was his support of small businesses. The bank regularly made 30- to 90-day loans, ranging from $500 to $2,000, to local entrepreneurs looking to start or expand their enterprises, at a time when this was a very significant amount of money.

And while many know of Benjamin Franklin ‘s contribution to the world of media, it was his founding of The Pennsylvania Gazette that not only revolutionized the world of print communications but was an entrepreneurial success as well, generating significant revenues through the sales of advertisements.

“It is important to recognize the many ways, not just politically but philosophically, our Founding Fathers set our country on a course towards success,” said SCORE’s Director of Marketing and Communications, Bridget Weston Pollack. “It is their examples of entrepreneurial achievements that inspire our enthusiasm for and support of small business today.”