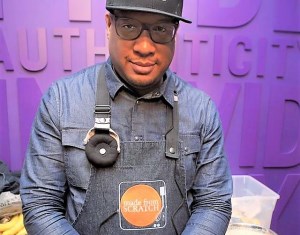 Dallas Green is the first celebrity DJ to compete on the Food Network’s Chopped. The “Game Day Party” episode marked his entry into competition cooking since launching his dessert company, Made From Scratch. Green is best known for touring the country with the NBA and globetrotting with Grammy award-winning rapper/actress Eve.

Green recently kicked-off the “Eats & Beats Brunchâ€ event in New York City, to toast his appearance on Chopped, with more pop-up brunch dates to follow. With Super Bowl LI fever officially underway, Green plans to be in Houston this weekend. His company also will be showcased at the V.I.P. reception of the Global Spin Awards, during the upcoming NBA All Star Weekend. Next stop after that? Green will kick-off festivities with New Era at their flagship store, with Allen Iverson and Emory Jones and Kelton Crenshaw, culminating in a weekend-long DJ dance party event tied to some of the biggest names in the league.

BlackEnterprise.com caught up with the DJ/chef, during the Eats & Beats Brunch:

BLACK ENTERPRISE: What was your experience like on Chopped?

Green: I am a big fan of Chopped. My [appearance was on] the “Game Day Party” [episode]–it was all about tailgating. It was less stressful than I thought.

I am a recipe chef. Being that I cater and do special events, I take time to curate each menu for the client. So, Chopped was my ultimate stress test. It allowed me to take [all of the surprise ingredients] and just go on a whim. You don’t get a hint on anything. You go in, they line you up, they say, “Open your baskets,” and that’s it–the clock starts. It doesn’t go by as fast as you [would] think.

BE: How did go from mixing beats to frying food?

Green: Traveling with Eve, I took to what we started eating–fine dining. I started to ask the chefs, “What are you cooking? Can I have a look?” They would invite me into the kitchen, and show me what to do. I would go home and recreate those dishes.

On the road, I’ve had worms in Africa, kangaroo in Australia, [and] chicken hearts in London. I definitely credit Eve for opening up my palette to all of these different things. During Gumball 3000, I said, “What is my conversation, other than ‘I’m a DJ’?” I wanted to elevate myself. So, I started my company Made From Scratch, which blends my love of music and food. Now–three years later–I’m here.

BE: What are some new dishes that you will introduce in 2017?

Green: I have rolled out a great Oscar menu, with a play on the titles of the movies nominated. I also have the Eats & Beats Brunch event, which I want to expand nationally, as opposed to only on the east coast. Sometimes, I tailor the menu [according to] the city [I’m in], and include their local culture [in the cuisine flavors]. These menues are based on cities that I have been to and experienced good food in.