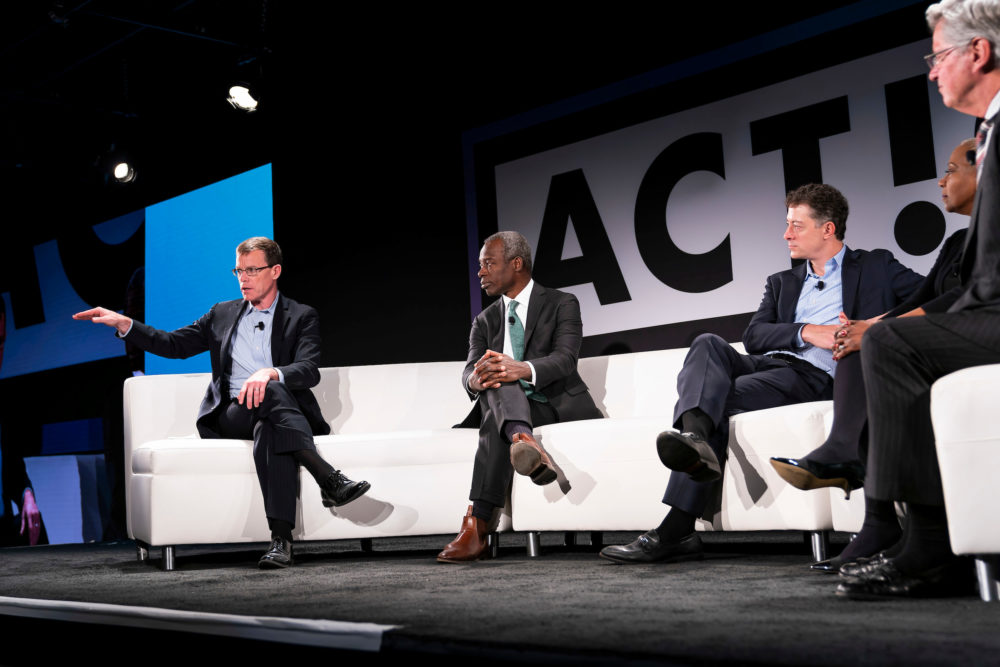 Leaders from more than 300 organizations recently gathered in New York City to focus on driving diversity and inclusion within corporate America. As part of the CEO Action for Diversity & Inclusion—considered the largest consortium of chief executives driven by the commitment to advance that agenda in the workplace—corporate and organizational leaders, along with chief human resources and chief diversity officers, held rounds of candid conversations and strategic reviews as they grappled with one of today’s most complex and vital business issues.

Since its inception, CEO Action has grown to include the leadership of more than 800 corporations and organizations as representing a range of industries that signed diversity and inclusion commitment pledges to engage in the following:

At last week’s closed-door session, attendees networked with peers, gained updates on programs like CEO Action’s Check Your Blind Spots Tour to explore individual unconscious bias within organizations and Day of Understanding to foster frank conversations on race, and participated in a series of roundtables to drive the advancement and execution of different ideas and approaches.

“When I was here the first year, it was mostly Fortune 500 and a few institutions,” maintains Cid Wilson, CEO of the Hispanic Association of Corporate Responsibility, better known as HACR. “Now, I’m seeing a breadth of participants that is much wider, and that’s something that needs to be addressed because we know diversity and inclusion drops off the smaller the company is. I think it’s reiterating that there’s still a lack of inclusion of women and people of color whether it’s a large corporation or non-profit or a medium-sized or small institution.”

Among those most pleased with the event’s attendance and outcome was Timothy Ryan, U.S. Chairman and Senior Partner of Big 4 accounting firm PwC and chair of the CEO Action Steering Committee “Every time we hold one on these meetings, we move the ball forward. I have heard from over a dozen CEOs that it has been impactful, and they feel more inspired than before. More importantly, I heard from several that they are going to reach out to more peers, “says Ryan, who developed the initiative in 2016 after the series of fatal police shootings of black men and the impact that those incidences had on PwC employees.

in an exclusive interview with BE Chief Content Officer Derek T. Dingle, Ryan discussed, among other topics, CEO Action’s future objectives and the leadership requirements for creating inclusive organizations.

With more than 800 signatories, is CEO Action on point related to its goals and timetables?

It’s only two years and four months old. When we launched CEO Action in the summer of 2017, the experts told us we’ll be lucky if we get 40 to 50 CEOs to voluntarily sign up and we’re at 800. I could not be more pleased where we are relative to numbers, but what I’m more pleased about is strategically what we’re trying to do to inspire the business community.

On our two-year anniversary in June, we added a fourth pledge and asked all CEOs to make that pledge in addition to the original three. We asked people to commit to do a diversity and inclusion strategic plan that’s prepared by managers and reviewed by the board. That was a big step, and I would anticipate that each subsequent year we will add more and more commitments generated by the steering committee and based on input from the broader community.

Diversity And Inclusion Must Be At Every level

In terms of adding the fourth pledge, you’re having the board place diversity and inclusion as part of the overall strategic agenda for a given company. With that said, we have found in our annual research on corporate governance that about 37% of S&P 500 companies still don’t have any African American representation. Will CEO Action have a focus on board diversity as part of its objectives?

There’s still a long way to go around in making the corporate world more inclusive at every level. To be clear, companies are not going to make CEO Action part of the board discussion but make diversity and inclusion part of the discussion. We had a panel in which we talked about the fourth commitment that had two CEOs’ perspectives and two board members’ perspectives. What we’re hoping for is that companies that follow through on this fourth commitment will develop a diversity and inclusion strategic plan that they review with the board. It should include everything from recruiting and retention to the development of high-capability talent and diversity at every level. So that was not only at the entry-level ranks but middle management and executive ranks So I would expect to have it at all levels and not just entry level, not just the board level but everything in between as well.

So would that also include CEO succession planning as well?

So one element that was different this year was the inclusion of CHROs and CDOs. Can you share with me the thinking behind that approach and the expected impact of that decision?

In each of the last two years, we had the largest gathering of CHROs and CEOs that we are aware of that ever took place. With the feedback that we got from both parties who have been convening separately in the last two years was this is good and powerful but it would also be powerful to bring us together. Why? Two fundamental reasons. One, it’s important for them to sit together real-time and talk about what action to take or what they could do differently. As a whole, you’re learning from each other. The second reason is that CEOs are busy people and by having their CHROs or CDOs there, they can make quicker actions within their organization.

Among the feedback I gained was that the challenge for diversity and inclusion initiatives tend to rest with the middle management area and that group trying to gain a greater understanding of why it should be a part of the culture and a focus in their day-to-day work. Will CEO Action include middle managers in future sessions so they can gain that understanding?

When we started this two and a half years ago, we deliberately chose the words CEO in action and the reason we did that was the fact that CEOs set the tone of their organization. It’s not a challenge to me. It’s a big opportunity to unlock the business potential if you build a more inclusive workforce. So we chose CEO action and target CEOs because they are remarkable in getting things done.

One of the big challenges that CEOs have in making their organizations more inclusive is “the middle” and to your point and that was a big topic during table group discussions. Well, we’ve spent a lot of time talking about different strategies to engage the middle more. We hope to come out of this gathering with different ideas. Interestingly enough, one of our big focuses over the past year has been on days of understanding and helping companies to have discussions amongst its workers.

Speaking of such programs, how effective has the Checking Your Blind Spot Tour been in expanding that thrust?

A little over a year ago, we launched the Check Your Blind Spot Tour. We own a bus and it has been a remarkable mechanism to engage people on blind spots and unconscious biases. Over the course of the last year, we’ve reached 3 million people across the country visiting over 100 companies, college campuses, and events. We actually had a debriefing on lessons learned, what worked, what we can improve. Feedback has been tremendous. We definitely intend to continue to do it but we will make tweaks. There’s some things people liked more than others like the gamification in virtual reality. People love the mirror on the bus. You can reflect on who you are as a person but our goal continues to be giving participants a better experience,

So what are CEO Action’s next steps?

The next big move is in February 2020 with our Month of Understanding. If we reach 60 million people through the coalition, we will be incredibly proud. That will be a big bold move with the momentum we had with the Day of Understanding on Dec. 7 last year. That gets to you when you walk through the door of your company, what’s really going on in your mind when events happen in our public. What’s really on your mind when I come across challenges in the workplace? And those days of understanding or in this case a month of understanding are meant to help us understand each other better and create opportunities for us to be even stronger together. We’ll continue to get input and continue to look for ways to inspire the community. I think it’s the biggest opportunity we have to help our society and our companies realize their full potential.

You’ve talked about being on this journey. How has it changed you as a leader and PwC as an organization?

It continues to open my eyes every day and inspires me to do more every day. I had dozens of people reach out to me after the session. One CEO made the point that if you’re in the CEO role, you can’t be afraid to lose your job. She nailed it. That’s what I’ve come to understand. You have to do what you believe is right for your people and your customers. If that means taking some flack or being removed from the job then that’s okay. That’s how I’ve grown.

So it’s about the development of courageous leadership and developing open environments?