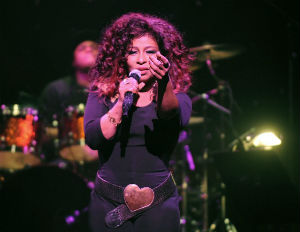 Celebrating her sixtieth birthday on March 23rd with soirees in New York, Miami *and* Los Angeles, the 10-time Grammy winner is not only preparing to mark another milestone, she’s celebrating a new chapter in her 40-year career — one that includes the expansion of her entrepreneurial empire.

Behind the scenes, the Queen of Funk-Soul has been keeping plenty busy, and not just releasing singles like “It’s Not Over,â€ which debuted on Valentine’s Day, or being feted as she was at BET Honors last month by fellow divas like Erykah Badu. Actually, the R&B songstress is now a sales-stress, luring fans to her online store with The iKhan Project, a unisex fragrance; her Khana Sutra line, a sexy collection of scented candles and home fragrances; and gourmet chocolates she calls “Chakalates.â€ Though some of these items have actually been available via department stores for the past few years, Khan recently began selling them exclusively on her web site, with a nod specifically to charity.

“A percentage of the sales for each of the items I sell will go to the Chaka Khan Foundation,â€ the singer says from an L.A. studio where she is recording songs for an upcoming album. “One portion will be for an educational initiative here in Los Angeles, another will be for an initiative in Louisiana for Hurricane Katrina victims and there will be more announcements to come,â€ she adds about her charity, which she founded to benefit women and children at risk.

These days Chaka is thrilled to be able to put her money where her mouth is, while exercising her increased business-savvy. She admits it was a long, hard road toward becoming the kind of business woman she wanted to be, given her strictly creative roots.

“As right-brained people we often neglect the left-brain aspect of ourselves,â€ the singer says of her lack of formal business training. “Through trial and error I’ve learned you have to understand how to run a proper business or you end up in trouble. You’ve got to be careful who you trust and watch where all those expenses go.â€

When she’s not counting her dollars the woman born Yvette Marie Stevens is investing in her biggest asset — herself — a process she jumpstarted by shedding 75 pounds via an all-liquid, extreme protein diet last year. Khan says that looking and feeling better has been key to building her confidence in the creative and fiscal realms.

“My stamina and my outlook on life has changed and I feel more capable,â€ she says of winning her years-long battle with the scale. “I was hiding and the extra weight on me was actually an armor of sorts. I didn’t want to feel anything and I didn’t want to be an attraction,â€ she says frankly. “It takes courage not to hide.â€

“[Women] have to take care of themselves because we’re responsible for so many other people,â€ insists the mother of two and grandmother of one, a child that she is raising. “I try every day to love myself more, and this one was a step I took to get there,â€ says the newly svelte star.

The physical and mental transformation came just in time for the release of an as-yet-unnamed album, to be released on July 1st, as well as the release of Chaka’s second book, a follow up to 2003‘s “Through the Fire,â€ which does not yet have a release date. In the coming months she says she’ll also be throwing new candle scents and chocolates into the fray, including healthy ones, “dark chocolates with plenty of nuts and antioxidants.â€

“But like with everything else, all things in moderation,â€ Chaka warns. “Except for the music of course.â€