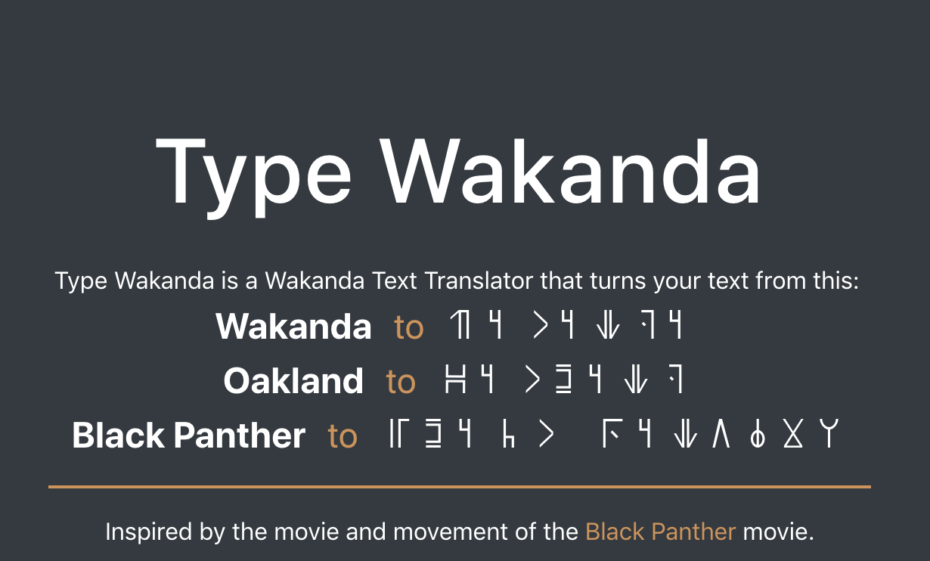 With all of the craze from the Black Panther film, folks are trying to stay as closely connected to the culture as possible. Change Catalyst co-founder Wayne Sutton is no exception. He recently created Type Wakanda, a text translator that allows you to deliver all of your messages in the Wakandan font.

“Everything about the Black Panther movie is innovative! From Ryan Coogler, writing and directing to the technology built by Shuri and all the innovation throughout the film,” Sutton told Black Enterprise. “When I first saw the text on screen translate from Oakland to the Wakanda font, I was like that’s really cool!”

In order to use the translator, you have to log onto the Type Wakanda site. The cool thing about it is, once you type, you can share your message out to the Wakanda tribe, i.e., your social media groups and really wherever else you want to place it.

The translator was released on Product Hunt yesterday and quickly caught buzz with an upvote of 150 people.

According to Product Hunter Deandre Durr, this was a redeemable submission for Sutton. His last product, “Anonymously Ask a Black Person,” was banned due to it being potentially perceived as “extremely offensive to any one person or group of people.”

“No one has submitted anything to go with the Black Panther movie all year,” Durr stated.

“The Black Panther movie is such an inspiring film for entrepreneurs, especially black entrepreneurs,” said Sutton. “I wanted to build something for the culture and for Black Panther fans. Also, I wanted to keep my coding and web development skills on point. I hope people find it fun and useful. #WakandaForever!”