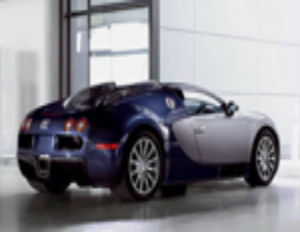 This bright red Ferrari could set the record on Aug. 14, as the most expensive car ever sold.

But according to USA Today, this is no ordinary Ferrari. This hot rod is a 1962 250 GTO Berlinetta, and is one of only a handful ever made. It also has the dubious and dark distinction of having been crashed in a fatal race, then put back together.

So why is it going for so much? It’s only one of 39 GTO’s, one of the last of the cars ever built to be raced and driven on your block. USA Today reports, auction house Bonhams is behind the auction and will feature it at an at an event “as one of a week’s worth of automotive shows and sales held every year.”

In order to get world’s most expensive car status, it will have to top the $52 million paid for another GTO last year, although that racer was sold in a private sale.

So it got us thinking. What are some of the other expensive cars out there? We all know successful celebs and athletes are already living the dream, but it takes a special kind of success to ride and travel in it as well.

Expensive cars not only guarantee instant respect from every valet on the planet, instant shade from every hater on the block, and an automatic green light from every potential gold-digger at the party,Â  they also guarantee automatic bragging rights.

Say what you want about rappers, but these cats know. According to a recent infographic put out by FinancesOnline.com, seven of the top 10 most expensive cars are owned by superstar rappers, including the Game and Flo Rida.

Here’s more. Male celebrities dominate the top 10. The top celebrity car is also the world’s most expensive and 50% f these cars are Bugatti Veyrons. We’re going to list them from the bottom up.