Can Charity Exist in a World of Excess? 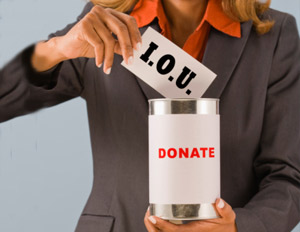 In this season of giving–and taking time off from work–I’ve had occasion to focus on the important things in life, like quality time with my family, reaching out to old friends, and catching up on my reading and reality TV. It’s amazing how much longer the days feel when you’re not trying to jam too much into them.

With time to spare, I’m more fully engaged and as a result, each moment takes on a sense of heightened intensity. Maybe that’s why when I sat leisurely reading my Sunday paper on Monday, dog at my feet, big mug of tea in hand, I was moved by a line of all green capital letters above The New York Times banner. It said: TODAY IS CHRISTMAS REMEMBER THE NEEDIEST!

Ironically, the paper wasn’t packed with stories about the needy. Despite the holiday, there was the usual mix of headlines from around the world and big-city news with a few musings on Christmas tossed in for good measure. But it was the story about the latest “biggest apartment sale everâ€ in my hometown of New York that impressed me most. I was stunned when I read it, and I haven’t been able to get it out of my head since.

It reported the closing of the closely-tracked sale of a three-bedroom apartment in a building overlooking Central Park on Manhattan’s west side. Final price: $24 million. The price is eye-popping, and so is the profit when you consider that the previous owner, described in The New York Times as a shipping magnate, bought the place for just under half that only three years ago–in 2008, the year the bottom fell out of our once robust economy.

But that’s not the part of the story that nearly made me choke on my tea. It might have, if not for a penthouse apartment in the very same building going to contract last week with an agreed upon price of $88 million. Yes, I said $88 million… for an apartment. Not a house with miles of acreage, not a sprawling gated mansion on a private lake with its own zip code, nor an entire building full of grand apartments, but one single dwelling in a building parceled into many–202 to be exact: $88 million.

What does an $88 million apartment look like? Hard to say, but its 6,774 square feet is terraced and bright with lots of windows and a heart-stopping view from atop a building that’s 19 stories high. The place is currently owned by former Citigroup CEO Sanford I. Weill and his wife, Joan, who have publicly claimed they plan to donate proceeds from the property to charity. Their philanthropic arms have a wide reach that’s already left an indelible mark on New York institutions from major hospitals to the Alvin Ailey Dance Company.

But that’s still not the part of the story that stopped me cold. After all, this is New York where very little about Manhattan real estate–from how small an actual living space can be to how much one can also cost–surprises anymore.

What I wanted to know was who buys an $88 million dollar apartment and it’s the answer that got me: A Russian billionaire, Dmitriy Rybolovlev, who is picking it up for his 22-year-old daughter, Ekaterina, a college student in the US. If your head’s not already swimming, get this: She doesn’t even go to school in New York, she just needs a place to crash when she visits!

Rybolovlev, who made much of his money in pesticides, is ranked by Forbes as the world’s 93rd richest person. He first made a name for himself in US real estate in 2008 when he purchased a 33,000-square-foot Palm Beach estate from Donald Trump for $100 million. This latest purchase, paying a mere $12 million more for a property a quarter of that size, easily trumps the Trump deal (to Don’s great displeasure, no doubt). I imagine it comes with at least one parking space but a hefty monthly maintenance fee (to maintain the building’s private health club, pool, wine cellar, and grand residents dining room) is additional, for sure. As is the private apartment staff that will keep the floors gleaming and the pillows fluffed. Welcome to New York.

Why do I care who lives at 15 Central Park West or what those grand apartments cost? Because it’s always fascinating to imagine how other people–especially the insanely wealthy–live. Because from a business standpoint, it’s wild to consider how during the most devastating financial era in a generation, two already exorbitantly expensive apartments could each double in value. And because the week between Christmas and New Years–Kwanzaa week–is always a time for reflection.