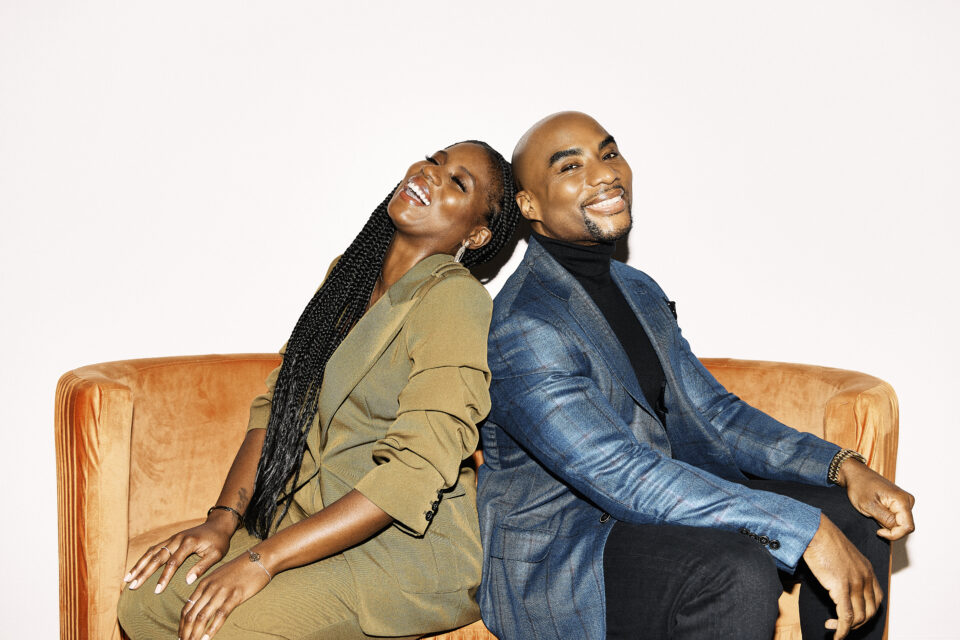 As the ’80s raced into the ’90s and hip-hop went from rec centers and cookouts into the wider world, so did the dream of making an impact in an amorphous, exciting genre.

It was everywhere: TV, art, clothes. It’s no wonder that a young boy from South Carolina was so intrigued with the culture and aspired to become a part of it. Lenard Larry McKelvey imagined himself part of the Sean “Diddy” Combs–led squad/label of Bad Boy. With a tattoo of comic book legend Wolverine holding a microphone in his right hand, symbolizing building a worldwide career through music for this kid in an anonymous Southern town.

That is Charlamagne’s Tha God’s origin story, though the narrative changed slightly for the host of the massively popular radio show, “The Breakfast Club.”

In becoming part of the culture, he still uses his words the way Wolverine wields his adamantium claws.

While pursuing a career as a lyrical wordsmith, McKelvey met a young local radio personality named Willie, who set the tone for Tha God.

In 1998 in Charleston, South Carolina, a conversation with Willie led Charlamagne to become an unpaid intern in the promotions department. It was grunt work—driving the station vehicle, getting food, hanging up posters. Whatever was asked of him, he did.

The hustle he employed as a kid never left.

As the co-host and driving force behind one of the most popular nationally syndicated radio shows in the country with Angela Yee and Rashaun “DJ Envy” Casey, there isn’t a media platform he isn’t on. Based in New York City, the Breakfast Club is available on Power 105 and Revolt TV. Charlamagne signed one of the biggest deals in radio history with iHeartRadio, partnering with the radio giant to form The Black Effect Podcast Network.

Charlamagne, 43, reminisced on how his podcast was named Brilliant Idiots. He appeared on Bethenny Frankel’s (The Real Housewives of New York City) talk show just being himself, making people laugh. She told him that he says the craziest smart things. She shouldn’t laugh at what he’s spouting–hell, it shouldn’t even make sense—but she’s transfixed. You’re like a brilliant idiot, she tells him. Hence the name of his podcast and possibly the secret to his appeal.

But that isn’t enough. Charlamagne has a big vision for the Black Effect Podcast Network, which already boasts 28 different shows and a recently launched website where you can hear the podcast and get the information from the network. With the personalities on the network, he says, “all of these brothers and sisters have so much valuable information to be shared.”

And he’s a brotha who shares his limelight. He gives thanks, love, and light to a woman he credits with successfully navigating the podcast space with perfection, Dollie S. Bishop, the president of Production and Creative Development for the Black Effect Podcast Network.

“I wanted all the focus to be on her because none of this would be as successful without her,” Charlamagne asserts.

“When I launched the Black Effect Podcast Network, which Dollie is not just president of, she’s got equity in it, too. She’s got [an] ownership stake in it when I launched it. She’s the first person that came to mind because, number one, she’s great with talent because of her television background. She’s just a boss.”

Bishop, who shares the BLACK ENTERPRISE cover with Charlamagne, has become a pivotal force in his life — and frankly, she’s family to him.

“I feel the most safest when it’s me, my wife, and Dollie together,” he admits.

“That’s my real family in a real way. We vacation together every year, and my mom loves her. She walks in the house, the kids, ‘Dollie.’ That’s family. I can’t describe it any other way. I just thank God that we found each other in this lifetime like I’m sure we found each other in many other lifetimes. She just holds things down, and this network would not nowhere remotely be successful if Dollie Bishop wasn’t in my life.”

Charlamagne’s plan is to make the Black Effect Podcast Network a multimedia conglomerate.

“I see us getting into the visual aspect of podcasts,” he says. “At some point, I see a lot of the podcasts becoming TV shows, not just TV shows. I see some of the talents on the Black Effect, making the transition to radio and being on different radio stations throughout the country. So yeah, I got a lot of different visions for the Black Effect.”

Again, there’s that hustle. Even when he has every right to celebrate, Charlamagne is doing something. This year, he, Yee, and DJ Envy were inducted into the Radio Hall of Fame. Making any hall of fame is a reason to drop what you’re doing and bask in the accolades.

“I couldn’t attend because I’m taping my late-night talk show, Tha God’s Honest Truth, and I wasn’t tripping on it. And the reason I wasn’t tripping on it, because when you’re on divine assignment, you’re always where God wants you to be when God wants you to be there. But for me, man, it just felt surreal. It felt real because I just never thought they’d let my Black ass in the Radio Hall of Fame.”

He credits the late great rapper Nipsey Hussle for the title of the late-night talk show. He mentioned that when Nipsey found out that Lauren London was going to meet Charlamagne for an interview, he told her she would like him because Charlamagne ruffles feathers. His fans know him for being honest.

OK, so is that enough, Charlamagne?

Charlamagne refuses to let the grass grow under his feet.

He recently signed a global multiyear, multiproject development, production, and audio licensing partnership with comedian and actor Kevin Hart. They are in a partnership with Audible Inc. with a new venture. Short Black Handsome Productions will focus on scripted audio projects that spotlight Black creators and stories. All this work comes under the banner of CTheGod World Productions.

Oh, and then there’s his partnership with Simon & Schuster. He has already produced a New York Times Best Seller, Black Privilege: Opportunity Comes to Those Who Create It, and a global bestseller, Shook One: Anxiety Playing Tricks on Me.

And from that partnership, Charlamagne earned his own imprint, Black Privilege Publishing, which also showcases other talented writers like Tamika Mallory’s “State of Emergency” and Anita Kopacz’s “Shallow Waters.”

The hustle never left, but it’s required. Charlamagne doesn’t just want to be a superhero, he wants to create his own universe.

“I develop a lot of television and a lot of films,” he says. “I love being creative. And even though I’m an audio guy, everything can’t be delivered via audio. Me and Kevin Hart, we got our audio script company at Audible. We want to take some of that audio scripted IP (intellectual property) and turn it into television and film in the future,” he says.

Charlamagne gravitated toward Wolverine because of the character’s “healing powers.” Nothing could kill him, but what’s most admirable with superheroes is their vulnerability. It might be their greatest strength. Tha God, after all, is just a man.

He’s been in therapy for around seven years. “That’s literally all I’m about; is healing. And all I want to do is help, you know, Black people, especially Black men, heal. Cause I feel like if we heal, we can show up.”

When I asked Charlamagne why mental health is being embraced more readily by Black people now, he said that people aren’t afraid to talk about it. “You got a bunch of people who are letting people know, ‘Bro, I’m not OK.’ And you know, I’m going, ‘Yes, I go to therapy once a week.” And I hate how you have folks now who say like, ‘Oh, people just jumping on the bandwagon. You know. ‘People just doing this cause it’s trendy.’ No! People are doing it cause it’s safer to do that.”

He loves that his daughter, during the pandemic, approached him and his wife in tears, saying she was “overwhelmed.” He’s proud she is using language that we wouldn’t have used at her age.

It’s a different kind of hustle—finding clarity in the fray—but it might be more satisfying because you can pass it on.

The idea of a boy from South Carolina with dreams of becoming a rapper with Bad Boy has become the conglomerate now known as Charlamagne Tha God.

McKelvey wouldn’t want it any other way. It’s his story. You can also write yours.

“Man, don’t let anybody tell you that your passion or your dream can’t happen because that’s not their vision. Your vision has to be your vision. The only thing they can do is either encourage you or talk you out of your dream. So what I would tell anybody: your dreams are your dreams. Nobody can really encourage you the way that you’re going to encourage yourself.”