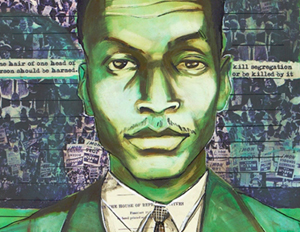 Artist Charlotta Janssen’s “Freedom Ridersâ€ exhibit, which is currently on display atÂ Philadelphia’sÂ African-American Museum through Sept. 30, has been making waves in the art and political arenas. The collection includes oil canvas mugshots of those who participated in the 20th century Freedom Bus Rides to fight for integrated public transit.

She sought to pay tribute to their struggles and triumphs, creating a small set of paintings honoring the Montgomery Bus Boycotters of 1955-56 and the Freedom Riders of 1961 and placing them in her Brooklyn restaurant.