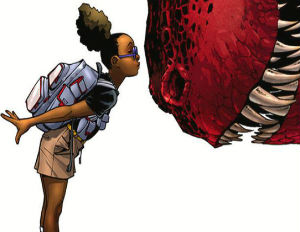 “Mark and I were talking about how whenever people come in with young kids, or even just for Mark’s own kids, we don’t have that many publications that we can give to people that have that broad reach,â€ Shaw explained to Entertainment Weekly. “Generally, we’re skewing a little bit older with a lot of our titles, and we wanted to create something that adults and kids could really love, like a Pixar feel. That’s where the tone jumped off for us.â€

The story originates from the 1978 Marvel comicÂ Devil Dinosaur, a story by Jack Kirby that took place in another realm and followed a red Tyrannosaurus Rex and his caveman-like friend, Moon-Boy.

The new and improved version takes place in New York City, instead of an alternate universe, where Lafayette and her dino take on modern day adventures.

Read more about the Moon Girl and Devil Dinosaur here.