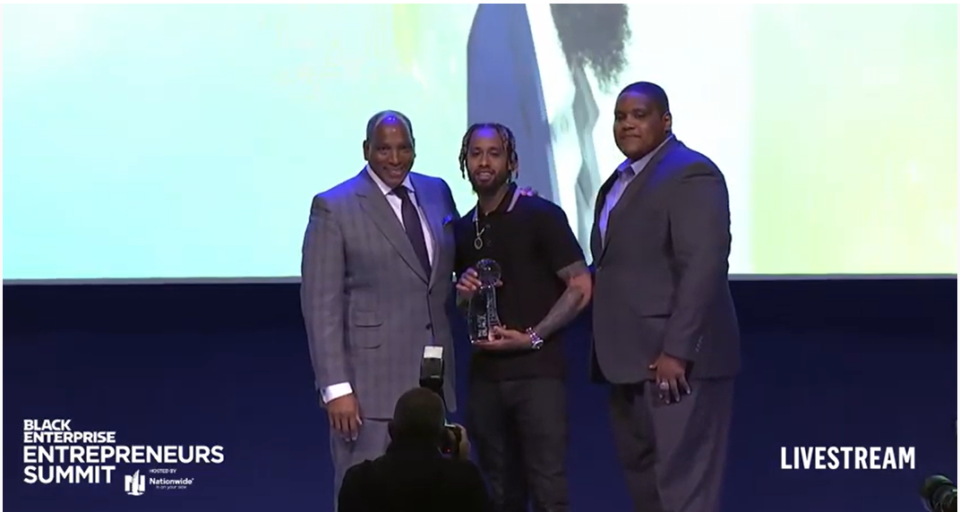 Journalist, TV, and radio personality Jacque Reid praised the crowd of entrepreneurs as she shared her excitement about her recent brand, Vegan Sexy Cool, which includes a podcast, blog, and YouTube channel.

“I’m happy to be here because I want to learn just like you guys,” Jacque said.

The Teenpreneur award recognizes a young entrepreneur between the ages of 13 and 19 who is committed to advancing the rich tradition of Black business achievement. Brown, 15, received the award for his commitment to advancing Black businesses. He is CEO of the trendsetting streetwear and lifestyle brand, SPERGO, which is headquartered in Philadelphia.

Before graduating high school, Brown already has two brick-and-mortar locations with plans of making his brand global. While accepting his award, Brown thanked the Black Enterprise for receiving the “high honor” and also thanked his family for supporting his entrepreneurial journey.

McGlonn received the Business Disruptor award for being a “mover and shaker” with her fashion company, Grant BLVD. Named after the street in the Milwaukee neighborhood she grew up, McGlonn modeled the brand around her passion for fashion and activism.

“This is to the curation of a new kind of closet, one that centers on thinking about the planet and being of service to all us, including those who are formerly incarcerated,” McGlonn said.

Hayes was praised for his commitment to philanthropy while running Big Dave’s Cheesesteaks. Hayes shared his passion for pouring into the Black community and providing “resources” to help his people thrive.

The most prestigious honor, the Earl Graves, Sr. Visionary Award, served as a celebration of his life and legacy. While accepting the award, Williams and Shank continued to celebrate the late Earl Graves, Sr and the trails he blazed for the future of Black entrepreneurs and business leaders.

“It is an honor to inspire the new entrepreneurs to blaze their own trail,” Shank said.