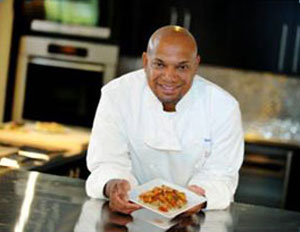 Watch NBC’s popular weight-loss series The Biggest Loser and you might get wrapped up on the contestants’ intense workout regimen or well-balanced meal plans. But do you ever wonder how you can infuse those same healthy eating options into your own diet? It’s a concept Chef Calvin Harris is proud he helped bring to fruition.

The classically trained French chef left the gourmet cuisine business for research and restaurant and product development. With more than 25 years in the business, Chef Harris–formerly Senior Director of Product Innovation at Burger King–has held positions at Carlson Restaurants Worldwide TGI Friday’s Division and Triarc Restaurant Group. He’s been recognized for his contributions to the food industry, winning the 2001 Menu Master’s Award (at Carlson Restaurants Worldwide) and named as Nation’s Restaurant News’ Top 50 Research and Development Culinarians, even being nominated for the Top Menu Strategist award given by Restaurant Business.

BlackEnterprise.com caught up with the Texas native as he shares how he got into the food business, setting out on his own and why Simply Sensible is in a league of its own.