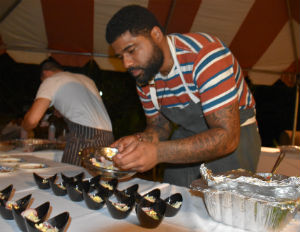 They say food is the way to one’s heart and, if this is true, Chef Digby Stridiron has earned his way into the hearts of many throughout the years. Born in St. Croix, Chef StridironÂ recognized his passion for the culinary arts at an early age and was led on a unique career journey, until finally returning to his heart’s desires.

After serving in The United States Air Force and later attending Johnson &Â Wales University in North Carolina, Chef Digby StridironÂ returned to St. Croix in 2007 and becameÂ Chef de Cuisine at The Shores Restaurant.Â While there, he also served asÂ personal chef to celebrities including actressÂ Vivica A. Fox and NFL playerÂ Kerry Rhodes, and eventually went on the road with musical artists Katy Perry and Nicki Minaj. Following his stint as a celebrity chef, StridironÂ realized that there was more to what he wanted to accomplish and decided to return to the fine- dining scene back home in the U.S. Virgin Islands, where he went on to spend time at Norman Van Aken’s award- winning restaurant, Norman’s in Orlando Florida.

BlackEnterprise.comÂ caught up with the St. Croix chef to learn how he’s reinventing the fine-dining scene, how he’s embraced the farm-to-table concept, and why he decided to quit show business and working for Nicki Minaj.

BlackEnterprise.com: You left St. Croix to go to North Carolina. What made you leave?
Stridiron: It was just that time. I moved back here is 2003 coming from the military. That’s the time I was trying to figure out what I should be doing, and I spent two years here working at different restaurants and a local high school. I realized I wasn’t just waiting around. I realized Â I had to go out there to figure out what I wanted to do and bring it back. That’s when I went there and decided to start school and take that path.

Why food?
It’s always been food. I started food in high school, working at the Buccaneer Resort. Food was always a part of my life growing up — whether it was going down by Armstrong Ice Cream with my father, or it was going for Christmas time. Food is a predominant part of our culture, and it’s very diverse here. Whether you have the food from Trinidad, where they have the Indian culture behind that, or the food from Jamaica, which is British inspired, or the food that came from Africa. You put all these foods under one place, and this is where you find it. Growing up here, it’s just food everywhere.

There’s a lot of food here, but do you think there’s a strong fine-dining community here in the Virgin Islands?
Well to be honest. There’s not too much fine dining in the Caribbean per se. I think America is starting to define what is fine dining. Sometimes we like to have beer with our food. I think we can have fine dining, but it’s just going to be how we define it.

Farm-to-table culture has gotten tremendously popular over the years, and this is a concept that you embrace. What made you take on this concept?
I would say I grew up farm-to-table and then I realized later on in life when I went to American stuff that they weren’t eating so locally. Growing up in the USVI, I’m used to eating plantains and foods from local farmers. A couple of years ago, I really started to put my thinking cap on; working with Norman Van Aicken. My mentor was able to allow me to put my thinking cap on when I was working at Luma Restaurant. What it is, is that you start to develop this farm-to-table concept and start realizing that farm-to-table is great, but what really got me excited is sustainability and wild-to-table. We’re not just going to the farmers and saying, ‘Hey, can we have the best produce that you have?’ But let’s go out there and find it first. Let’s be able to find it first. Let’s put our hands in the dirt, or go swim and catch the conch. Let’s find the best produce that the island has to offer.